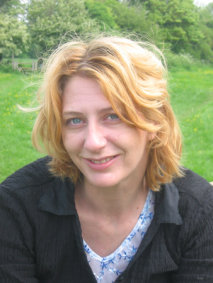 L.S. Matthews
"I wouldn’t write a book which didn’t challenge the reader with questions which maybe aren’t easily answered. I have to write books which at least have the potential to effect changes . . ."--L. S. Matthews

L. S. Matthews is the winner of the Fidler Award for her book Fish, an award given for a first novel for children. She lives and writes in England.

How I write:
When I wrote Fish, it was based on a dream I had. I woke up and thought (as you would, if you had a dream like “Fish”), what was all that about? I thought about it, and it seemed to start making a kind of sense. I think I had to put the events in order, as parts of the story appeared in flashback sequence in the dream. I am not sure, but I think I continued to dream other parts of the story later.

There is no sensible time, as an adult with responsibilities, to sit about writing stories, but I wrote Fish at a particularly silly time. I had two children, knew I had to sell my house, but had no idea where we were going to live, or how we could afford it - I had just walked away from three terms of strenuous teacher training.

With all these pressures on me, I watched news footage of determined and courageous refugees on television, and went off to bed, worrying about, of all things, how I would transport the three Koi Carp from our pond without distressing them, and to where?

All my writing seems to happen like this - it works from dreams; in the daytime, I correct and alter and move it around in my head till it seems to make sense; I don’t write anything down; and by the time I come to write, I know it pretty well and have got rid of all the worst mistakes. Because it’s hard to keep a whole book in your head and keep running through it to make sure you don’t forget, I’m very keen to get it down. I touch type (I was forced to learn how in my first job) so, having worked on a book in my head for maybe six months, I can have the first draft out in two to four weeks, because I am just typing out a story I have already written. I like to do this outside as much as possible, otherwise I get miserable from being inside too much. With Fish, I typed for 12 hours a day sometimes, in this very brief period; I calmed down a little with my second book.

I like to work like this because when it’s in your head it is easy to just rip out a chapter or move something to a different part of the story - no retyping time and time again!
When I was a child and had scary dreams, I learned to manipulate them, to control the events. I think this plays a part in the way my dreams form the stories to my books.

Where do you get your ideas for characters, settings, events?
All of my characters have different parts of my personality in them, I suppose, and parts of people I have known.

Events - well, I have never battled through a war-torn zone, but I came across a body when I was ten or so, and therefore I could write about Tiger’s feelings, sitting by the body of the young man who was shot.

I grew up the youngest of a family of five children; both of our parents worked full time and the house had a long garden which backed onto a wild area of land . . . much of my time was spent scrambling about, making camps, coming home filthy and scratched, but happy. I had two older brothers and singularly failed to notice that girls should be different until people started telling me so at about the age of 12. I had already noticed something was up when I was sent to our local school at 7, and didn’t get to play cricket and football like at home, but was pushed into a collection of people who played netball and rounders . . . hence the issue - or lack of it! - of Tiger’s gender in Fish. Some people still don’t get it. They say, “I thought it was a girl/boy” and then ask, “Well, which was it then? What was Tiger supposed to be?”

I answer: “Tiger’s not supposed to be anything.”

Then they say, “Yes, but what did you write it as? Girl or boy?” Just as they are sure there is an answer, I am equally fascinated by the fact they think it matters.

Animals (including fish and birds) are important in my books because:
They may appear in the story at a moment which makes them symbolic, but they’re real too.

I communicated with animals probably before I could walk or talk; they were just different kinds of “peoples” to me then. I am more likely to notice a small bird hidden in a hedge than a human passing in full view and I still find it hard sometimes to concentrate on a human conversation when an animal is talking at the same time.

What motivates me to write?
It gets things out of my system, things that I am cross about, and maybe I can’t put everything right, but I can say to the world, “What about this? This is not good enough.” And to readers who may not have been fully aware: “This is reality, I know you’d rather think it has nothing to do with you.” But at the same time I can show the inspirational qualities of people . . . I am angry at what they are put through, but their courage and determination is something to admire, and only tends to be shown when tested to the limit. It puts my own worries, and my own abilities to cope, in proportion. I wouldn’t write a book which didn’t challenge the reader with questions which maybe aren’t easily answered. I have to write books which at least have the potential to effect changes . . .
Read More +
2 results   page 1 of 1   view sort by 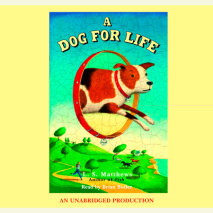 A Dog for Life
Author: L.S. Matthews | Narrator: Brian Butler
Release Date: October 10, 2006
This is the true story of the journey of John Hawkins and his dog, Mouse, from way up north to way down south. Mouse has been John and his brother Tom's dog for life. They got her as a puppy when they were just little themselves, and they very quickl...
ABOUT THIS AUDIOBOOK
$13.50
ISBN: 9780739336823
Unabridged Download 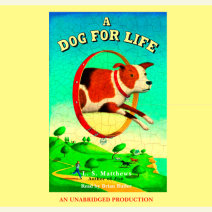 audio
Fish
Author: L.S. Matthews | Narrator: Jenna Lamia
Release Date: June 08, 2004
A compelling novel that touches upon the hardships that refugees face and their resilience in the most dire of situations, “celebrat[ing] the human spirit and inherent kindness” (School Library Journal).      My stor...
ABOUT THIS AUDIOBOOK
$10.95
ISBN: 9781400085224
Unabridged Download