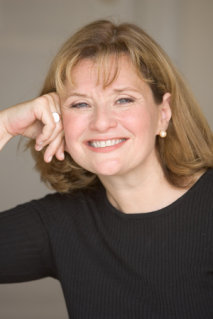 Katy Kelly
What made you want to write?
I come from a family of storytellers. My parents are both writers. Our dinner table has always been where the events of the day are reported with great hilarity or drama, sometimes both at once. That taught us about pacing, delivery, what works and what doesn't. We read a lot. Possibly because we had no TV.

So dinner was a long series of teachable moments?
We didn't know we were learning and my parents didn't know they were teaching. It was just dinner. My siblings and I were brought up to value original thinking, honorable behavior, laughter, and books. Our passions were taken seriously. They didn't dwell on our shortcomings–math, science, Latin. We were never described as aspiring. Michael was a writer, Meg an actress, Nell a scientist. I was an artist. Our titles expanded as our interests grew. Ultimately, three out of the four of us became writers. My parents became the models for Lucy Rose's grandparents, Madam and Pop.

How did you get into writing professionally?

I was working as an illustrator and walking the floors with our darling, relentlessly colicky baby when a friend called to ask if I would like a two-day-a-week job doing basic research and phone answering at People magazine. I would have done it for free.

I started covering parties for People and graduated to bigger stories. Six years and another baby later, I was hired as a feature writer for USA Today's Life section. Reporting taught me to write fast and to be frugal with words, and it let me ask questions that would be rude under any other circumstances. I spent time in Hollywood with movie stars, in Washington with the president, and in Mississippi with people who lived in houses that rented for $60 a month. No plumbing, no electricity, one good wind from toppling over. I learned to listen to what people were (and weren' t) saying, to understand what they cherished and what they feared. I can't imagine that I could write good fiction without having reported on so many real lives.

Where do you get your ideas?
In schools, on the subway, in the market. Something happens and it triggers an idea. My first book, Lucy Rose: Here's the Thing About Me, came about when, one night at family dinner, my mom said about her dog, "Poppy has been so much better since I've been telling her where I'm going and what time I'll be back." That struck me as hilarious. After they left, I typed the words: "My grandmother thinks her dog can tell time." The story took off from there. Until my mom said that I hadn't thought about writing a children's book. I tell aspiring writers to eavesdrop. It's a great way to get ideas and to get a sense of how people really talk. When you have something, write it down as soon as you can.

How do you write?
I follow the advice of that old Nike ad: Just Do It. Lots of people think about writing a book but say, "I don't have time," or "I'm waiting for inspiration," or "I want to get it worked out in my head first." If you want to write, carve out the time. If you write a page a day in a year you'll have the first draft of a novel.

What are the biggest writing mistakes people make?
Thinking bigger words are better words, becoming wedded to every word so they can't bear to throw anything out. Many writers repeat themselves. Say it once. Readers are smart. They remember.

How do you sharpen your work?
What works best for me is to write a bit, edit, make changes, write some more, and repeat from the beginning. When I finish a piece, I go through it once just to find and banish clichés. Then I run a search for the words very and really. They take up space and almost never help the writing. I read my work out loud. That is the surest, quickest way to tell if the voices ring true or the writing is lumpy.

Your favorite book?
I can't pick a favorite. But I am in awe of Ernest Hemingway's six word short story: "For sale: Baby shoes, never worn."

Do you start with an outline?
No. But I do make a list of five or six things that are going to happen. Sometimes I change my mind, but the list gives me some direction.

Are Washington, D.C., and Capitol Hill like they are in the Lucy Rose and Melonhead books?
The neighborhood has been gentrified, but it is still full of families and dogs and shops and adventures. (Almost all of the places in the book are real.) When we were young, my brother and sisters and I spent our days roaming around the Capitol, playing pick-up soccer on the Library of Congress lawn and dropping in on the Smithsonian museums. We regularly climbed the 897 steps to the top of the Washington Monument and took so many tours of the FBI that the guides recognized us. When my dad was a young reporter, he used to meet Harry Truman at Union (train) Station and they' d do the interview while they walked. Washington is less free-wheeling now. Security is tighter, kids can't tour the FBI without an adult, you have to go through your Congressperson to get a White House ticket, and you have to take the elevator to the top of the Washington Monument.

Your family has lived on the same block of Constitution Avenue for generations.

It's been a good place to chart change. My dad was born at home in 1923. One of his earliest memories is seeing the KKK march past the house in 1925. He was two years old. In August 1963, when I was seven, thousands of people in the March on Washington walked the same route to hear Dr. King deliver his "I Have a Dream" speech. My mom was days away from having my sister Nell, and her obstetrician wouldn't allow her to walk that far. Instead she, my brother Michael, my sister Meg, and I passed out free lemonade and cookies all day. (My dad was reporting on the March for the Washington Daily News.) In January 2009 all of us, including my eight-year-old nephew watched hundreds of thousands of people walk past the house on the way to see President Obama get inaugurated.

Out of four Kelly kids, three became writers. What do they do?
My sister Meg is a screenwriter. For years she wrote for soap operas. Until recently she was the co-headwriter for Days of Our Lives.

My brother Michael reported for the New York Times, the New Yorker and the National Journal. He was a syndicated columnist, the author of Martyr's Day and the editor of the Atlantic Monthly. It is the great heartbreak of our lives that Michael was killed while reporting on the first days of the war in Iraq in 2003.

My sister Nell has the most important job in the family. She teaches kindergarten and first grade.

What do you tell kids who want to be writers?
Do it! I've met a lot of artists and singers and writers who were going to college to study business or teaching or dental hygiene. People, often parents, have convinced them that their passion is too risky for real life. Pursue the practical, they say, you can always sing in the church choir, paint on the side, write in your off-hours. Though said with love, this is lousy advice. Passions almost always stem from talent. And when you're talented and work hard, you get jobs.

How did you get your book published?
After I finished, I sent it to four agents. I have still not heard back from them. It was my great good fortune to have a friend who passed my manuscript on to his editor. That said, I do believe good books get published, just not as fast as one hopes.

What can a children's book writer do to find a publisher?
Join the Society of Children's Book Writers and Illustrators. They have groups all over the country. Go to their workshops. Make contacts. Have faith.

She has two children, Emily and Marguerite.

She married her college sweetheart. His name is Steve.

She has a dog named Ellie. When Katy was a kid, she had a big, black French Poodle named Gumbo. He appears in the Lucy Rose and Melonhead books.

She lives in Washington, D.C.

She spends much of her money at bookstores.

She is wild for ice cream and chocolate and especially chocolate ice cream.

She draws and paints.

Her office is in her house. It is pink and green and jazzy.

If she could choose one extra talent, it would be singing.

Her mom, Marguerite Kelly, is the author of The Mother's Almanac.

Madam and Pop are now celebrities in their neighborhood.

About the author
Katy Kelly is the daughter of writers. She and her siblings grew up on Capitol Hill in Washington, D.C., five blocks away from the U.S. Capitol, four from the Senate buildings, and three from the U.S. Supreme Court.
She was a reporter and editor for 20 years before becoming an author.
Read More +
2 results   page 1 of 1   view sort by 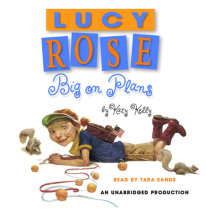 Lucy Rose: Big on Plans
Author: Katy Kelly | Narrator: Tara Sands
Release Date: June 14, 2005
I’m Lucy Rose, and here’s the thing about this summer: I am big on fun and big on plans. I am desperate to make a lanyard keychain, and Jonique is feeling the same about potholders. Plus I have to get rid of 78 or more squirrels that are ...
ABOUT THIS AUDIOBOOK
$13.50
ISBN: 9780307207197
Unabridged Download 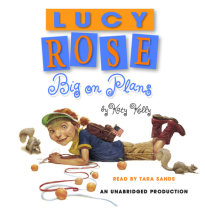 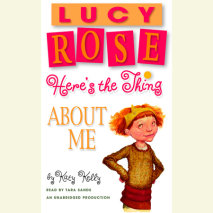 Lucy Rose: Here's the Thing About Me
Author: Katy Kelly | Narrator: Tara Sands
Release Date: September 14, 2004
I’m Lucy Rose and here’s the thing about me: I am eight and according to my grandfather I have the kind of life that is called eventful, which means NOT boring. According to my mom and my grandmother I’m what they call a handful. An...
ABOUT THIS AUDIOBOOK
$8.95
ISBN: 9781400091522
Unabridged Download 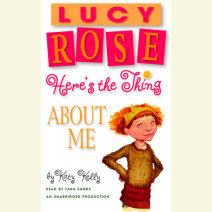