Maureen Dowd was born in Washington, DC, received a BA in English from Catholic University in 1973, then began her career at the Washington Star. From there she went to Time magazine, then moved to The New York Times in 1986 as a Washington correspondent. She has covered four presidential campaigns and served as a White House correspondent. In 1995 she became a columnist for The New York Times's op-ed page and in 1999 won the Pulitzer Prize for distinguished commentary. 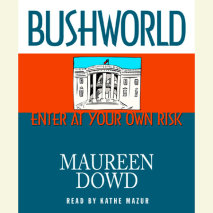 Bushworld
Author: Maureen Dowd | Narrator: Kathe Mazur
Release Date: September 25, 2004
From Washington to Kennebunkport to Texas to old Europe and new Europe, during the past two decades Maureen Dowd has trained her binoculars on the Bush dynasty, putting them, as both 41 and 43 have complained to her, "on the couch." Here she wittily ...
ABOUT THIS AUDIOBOOK
$22.50
ISBN: 9780786551262
Unabridged Download 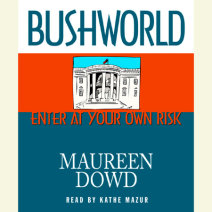