In 2000, Paul Orfalea retired from his position as chairperson of the company he named in honor of his childhood nickname (he had kinky hair). He frequently teaches at the University of Southern California and talks to educational and business organizations around the country. Both USC and Cal Poly plan to dedicate business schools in the Orfalea name in honor of his ongoing contributions. Through the Orfalea Family Foundation, Mr. Orfalea supports a broad range of educational initiatives. Orfalea is also deelply involved in increasing public awareness of the need for family-friendly work/life policies, including flex time and quality early care for children of working parents. He lives with his family in Santa Barbara, California. 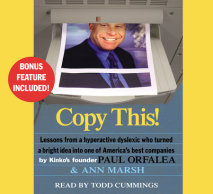 Copy This!
Author: Paul Orfalea and Ann Marsh | Narrator: Paul Michael
Release Date: August 30, 2005
Copy This!, Paul Orfalea's inspiring personal story of turning lessons into lemonade, may be the most unusual business memoir ever published.Paul Orfalea struggles mightily to read, to write, and to sit still through business meetings. So what's the ...
ABOUT THIS AUDIOBOOK
$15
ISBN: 9781415928158
Abridged DownloadUnabridged Download 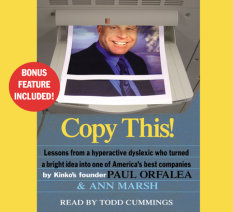