Howard Fineman is the author of The Thirteen American Arguments and is Newsweek’s senior Washington correspondent and columnist. His “Living Politics” column appears regularly in the magazine, on newsweek.com, and on MSNBC.com. An award-winning writer, Fineman is also an NBC news analyst and a regular on Hardball with Chris Matthews and Countdown with Keith Olbermann. His work has appeared in The New York Times, The Washington Post, and The New Republic. Once a regular on CNN, Fineman now reports exclusively for NBC, and has appeared on most major public affairs shows, including Nightline, Face the Nation, Larry King Live, Fox News Sunday, Charlie Rose, and Washington Week in Review. Fineman lives in Washington with his wife and two children. 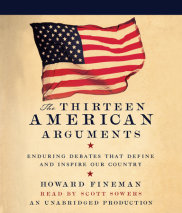 audio
The Thirteen American Arguments
Author: Howard Fineman | Narrator: Scott Sowers
Release Date: April 22, 2008
Howard Fineman, one of our most trusted political journalists, shows that every debate, from our nation’s founding to the present day, is rooted in one of thirteen arguments that–thankfully–defy resolution. It is the very process of...
ABOUT THIS AUDIOBOOK
$20
ISBN: 9780739359228
Unabridged Download 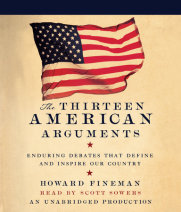