Isak Dinesen is the pseudonym of Karen Blixen, born in Denmark in 1885. After her marriage in 1914 to Baren Bror Blixen, she and her husband lived in British East Africa, where they owned a coffee plantation. She divorced from her husband in 1921 but continued to manage the plantation for another ten years, until the collapse of the coffee market forced her to sell the property and return to Denmark in 1931. There she began to write in English under the nom de plume Isak Dinesen. Her first book, and literary success, was Seven Gothic Tales. It was followed by Out of Africa, The Angelic Avengers (written under the pseudonym Pierre Andrézel), Winter's Tales, Last Tales, Anecdotes of Destiny, Shadows on the Grass, and Ehrengard. She died in 1962. 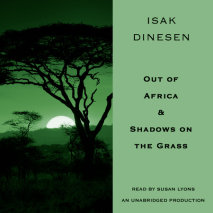 audio
Out of Africa & Shadows on the Grass
Author: Isak Dinesen | Narrator: Susan Lyons
Release Date: July 21, 2015
Out of Africa:In this audiobook, the author of Seven Gothic Tales gives a true account of her life on her plantation in Kenya. She tells with classic simplicity of the ways of the country and the natives: of the beauty of the Ngong Hills and coffee t...
ABOUT THIS AUDIOBOOK
$22.50
ISBN: 9780147522047
Unabridged Download 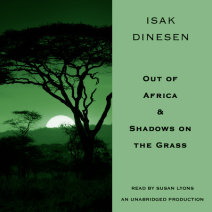