home
x
Subscribe
Mara Rockliff
MARA ROCKLIFF is the author of many lively historical books for children, including Mesmerized: How Ben Franklin Solved a Mystery That Baffled All of France, winner of the Cook Prize and an Orbis Pictus Honor Book. Her newest titles are Lights! Camera! Alice! The Thrilling True Adventures of the First Woman Filmmaker, called "Subtly STEM, fun, and beautiful to look at" in a starred review from School Library Journal, and Born to Swing: Lil Hardin Armstrong's Life in Jazz, among other books. Visit her on the web at mararockliff.com or on Twitter @mararockliff. 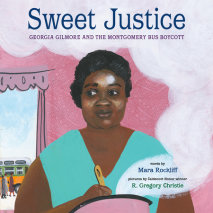 Sweet Justice
Author: Mara Rockliff | Narrator: Rosa Howard
Release Date: January 11, 2022
An inspiring picture-book biography about the woman whose cooking helped feed and fund the Montgomery bus boycott of 1956, from an award-winning illustrator.Georgia Gilmore was cooking when she heard the news Mrs. Rosa Parks had been arrested--pulled...
ABOUT THIS AUDIOBOOK
$5
ISBN: 9780593509364
Unabridged Download 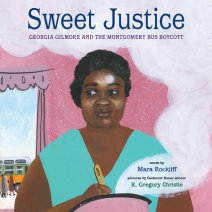