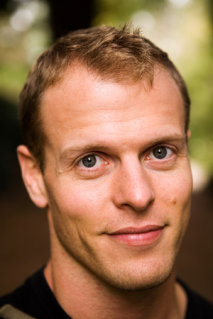 Tim Ferriss has been called “a cross between Jack Welch and a Buddhist monk” by The New York Times. He is one of Fast Company’s “Most Innovative Business People” and an early-stage tech investor/advisor in Uber, Facebook, Twitter, Shopify, Duolingo, Alibaba, and more than fifty other companies. He is also the author of four #1 New York Times and Wall Street Journal bestsellers: The 4-Hour Workweek, The 4-Hour Body, The 4-Hour Chef, and Tools of Titans. The Observer and other media have named him “the Oprah of audio” due to the influence of his podcast, The Tim Ferriss Show, which has exceeded 200 million downloads and been selected for “Best of iTunes” three years running. 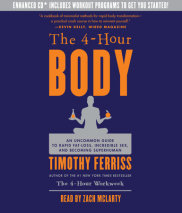 audio
The 4-Hour Body
Author: Timothy Ferriss | Narrator: Zach McLarty
Release Date: December 14, 2010
ENHANCED CD 3 * INCLUDES WORKOUT PROGRAMS TO GET YOU STARTED!Thinner, bigger, faster, stronger... which section of the audiobook will you listen to?Is it possible to: Reach your genetic potential in 6 months? Sleep 2 hours per day and perfo...
ABOUT THIS AUDIOBOOK
$22
ISBN: 9780307704627
Abridged Download 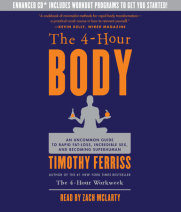