Gregg Easterbrook is the author of nine books, including The Progress Paradox. He is a contributing editor to The Atlantic, for which he has written more than a dozen cover stories, and The New Republic. His articles have appeared in The New York Times and Los Angeles Times, as well as on the covers of Newsweek and Time. He has appeared on Today, Larry King Live, Nightline, CBS Morning News, All Things Considered, NewsHour with Jim Lehrer, The Diane Rehm Show, and The O'Reilly Factor. And, as a hobby, he writes the Tuesday Morning Quarterback football column for ESPN. He lives near Washington, DC, with his wife and three children. 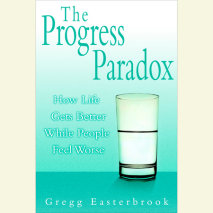 The Progress Paradox
Author: Gregg Easterbrook | Narrator: Rick Adamson
Release Date: November 25, 2003
In The Progress Paradox, Gregg Easterbrook draws upon three decades of wide-ranging research and thinking to make the persuasive assertion that almost all aspects of Western life have vastly improved in the past century--and yet today, most men and w...
ABOUT THIS AUDIOBOOK
$19.95
ISBN: 9781415901335
Abridged DownloadUnabridged Download 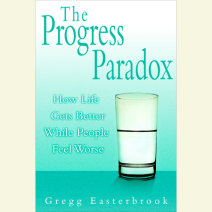