Author/illustrator of children's picture books, graphic novels, and YA novels, Brie Spangler loves to draw and write stories and drink massive amounts of caffeine. Writing down the ideas in her head was scary as a kid, so she turned to making pictures instead. Brie worked as an illustrator for several years before she began to write and immediately became a frothing addict. Her YA novel Beast was nominated for a Lambda Award and was named a best book of the year by Publishers Weekly and Kirkus. A graduate of the Rhode Island School of Design, Brie now lives in the Bay Area with her family. Follow her on twitter @BrieSpangler. 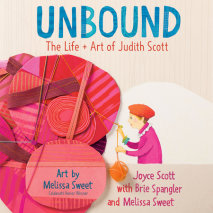 audio
Unbound: The Life and Art of Judith Scott
Author: Melissa Sweet, Brie Spangler and Joyce Scott | Narrator: Joyce Scott
Release Date: June 08, 2021
A moving and powerful introduction to the life and art of renowned artist, Judith Scott, as told by her twin sister, Joyce Scott.Judith Scott was born with Down syndrome. She was deaf, and never learned to speak. She was also a talented artist. Judit...
ABOUT THIS AUDIOBOOK
$5
ISBN: 9780593399217
Unabridged Download 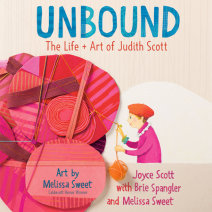