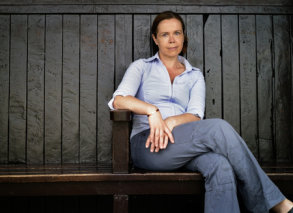 Before I Die, published in 2007, was a huge success. Was it difficult to write another novel following that?
It’s very easy for a first time novelist to feel like an impostor, to fret that everyone who has shown faith in them will soon realise that they’ve made a horrible mistake and that coming up with a second novel is completely out of the question. I spent a lot of time worrying instead of writing.

Both of your young adult novels broach difficult subjects—the terminal illness of a teen in Before I Die and sexual assault in You Against Me. What is it that draws you to tackle such weighty topics?
I don’t know. I can’t seem to help it. I don’t really think in terms of themes or topics when I begin a project; I’m more interested in characters and the stories they have to tell. I seem to have a tendency to be drawn to the extraordinary in the everyday and vice versa. In Before I Die, the protagonist is dying, but the novel is actually an examination of what it means to be alive. In You Against Me, there has been an allegation of sexual assault, but at the book’s heart is a love story.

What inspired you to write You Against Me?
I actually knew very little when I started writing. I had a few ideas, but they were abstract, theoretical, as if I knew the tone of the piece, but nothing else. I always use free writing techniques when I start a new book, which is a bit like improvising in theatre—throwing words down and not planning anything in advance. Most of it goes in the bin, but the strongest themes and voices keep returning.

After months of this, I began to know more. I was haunted by a small seaside town, by a girl called Karyn who alleged something terrible had happened to her and by her brother, Mikey, who was out for revenge.

Your new novel handles a very tough topic that effects many teens. What was that responsibility like and how did it inform your writing?
I often felt overwhelmed with responsibility. I didn’t want any girl or young woman to pick up my book and think after reading it that they shouldn’t bother reporting an assault, and yet I wanted the novel to accurately reflect the very difficult realities of prosecuting a case such as this.

I tried not to let my fear inform the writing. The danger was that I would hold back on tackling anything too difficult in case I offended anyone. To counter the fear, I interviewed criminal lawyers, social workers, family support workers and police officers. I watched court cases and read lots of books. The research really grounded the novel, but it slowed me down a lot too. When the first draft was finished, every single one of the people who helped me with research read it and gave feedback. I wanted any gender bias or prejudice to come from the characters, not from the author. I wanted to be sure I wasn’t perpetuating any myths or stereotypes around sexual assault.

Were there any other young adult works that you found particularly helpful or inspirational while working on You Against Me?
I tend to steer away from fiction that is thematically similar when I am writing. I stick to nonfiction books about the subject instead.

The two main characters of You Against Me are not directly involved in the incident that the book centers around. Did you know from the beginning that you would tell the story from the perspectives of Mikey and Ellie, the siblings of the victim and the accused?
I originally started writing from Karyn’s point of view, but it became clear quite quickly that her perspective was too “hot.” In fact, she was a very unreliable narrator, often unwilling and mostly silent, almost as if she didn’t want to be in the story. At that point, her brother Mikey took over the narrative. In fact he ran with it. He was determined to avenge his sister and all I had to do was follow him.

I loved writing Mikey because he was a mass of contradictions—he’d left school with limited prospects, yet was hugely ambitious. The main carer for his family, he also managed to juggle a complicated love life. Bright, but often inarticulate, he had an innate distrust of authority, yet his family were dependent on police and social workers for support.

I thought I’d found the book’s narrative voice, but then Ellie appeared—clever, determined Ellie. She’d recently moved to the area and had no friends yet. She did, however, have a brother and she certainly seemed to know a lot more than she was saying about what had happened to Mikey’s sister.

With two voices, a more complex narrative began to emerge. I also knew that being one step back from what happened was a more interesting way to tackle the subject of assault and all the prejudice that surrounds it.

While dealing with sexual assault, You Against Me is much more than an “issues” book. Was the theme of finding love in unexpected places something that evolved during the course of your writing?
You Against Me is a love story, but the love is fought for under very difficult circumstances. It’s also about truth, about looking at someone you know really well and wondering if you know them at all. Those two threads evolved quite quickly as I wrote.  I don’t want my job as a writer to be about looking at “issues” or giving moral guidance. Teens don’t want to read about things adults think are good for them, or about how they ought to behave.

Of course, books can address difficult situations and confront social issues and help readers deal with real-life challenges. They can transport you, make you think, move you . . . the list is endless. Ultimately though, it’s the story—with all its complexities, with the emotional truths it uncovers, the experiences beyond the everyday that it gives, that will be the real reason why young people read.

The Parkers and the McKenzies are from different social classes. What inspired you to have these families, and Mikey and Ellie, come from such varied worlds?
I know it sounds odd, but I have no clue about character, geography, social class, or anything else when I begin a novel. After months of generating material, I begin to get a clearer idea of what a book might be about. I guess I had Romeo and Juliet in the back of my mind because I was interested in loving someone forbidden. But I also had Hamlet in my mind—something rotten in your own family.

It was important to me that my two central protagonists would never have met under normal circumstances. I wanted them to have to tackle their own prejudices about each others’ backgrounds, as well as their preconceptions about the assault. I wanted them to fall in love “despite themselves.”

What do you hope that readers come away with after reading You Against Me?
I was attempting to write a good story, one that moved readers emotionally, but also made them think. I hope that the book encourages debate for the very reason that I am not telling anyone what the right answers are.
Read More +
1 results   page 1 of 1   view sort by 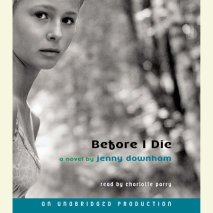 Before I Die
Author: Jenny Downham | Narrator: Charlotte Parry
Release Date: September 25, 2007
For the many readers who love The Fault in Our Stars, this is the story of a girl who is determined to live, love, and to write her own ending before her time is finally up.Tessa has just months to live. Fighting back against hospital visits, en...
ABOUT THIS AUDIOBOOK
$17
ISBN: 9780739362891
Unabridged Download 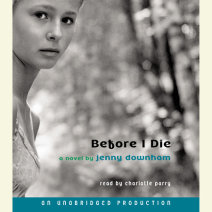