Jon Roberts is the man considered most responsible for bringing cocaine into the United States during the era in which the Medellin Cartel flourished, an experience about which he wrote in American Desperado: My Life—from Mafia Soldier to Cocaine Cowboy to Secret Government Asset. He is a central figure in the documentary Cocaine Cowboys, which has been watched by millions. 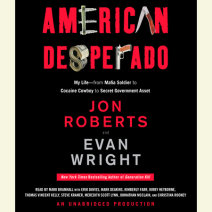