Tom Coughlin was the head coach of the New York Giants for 12 seasons and led them to two Super Bowl victories. He was also head coach of the expansion Jacksonville Jaguars for nine seasons, leading the team to two appearances in the AFC Championship Game and named NFL Coach of the Year in 1996; was head football coach at Boston College; and was an assistant coach for the Green Bay Packers, Philadelphia Eagles, and New York Giants. Coughlin and his wife, Judy, have been married 41 years and have four children and five grandchildren. 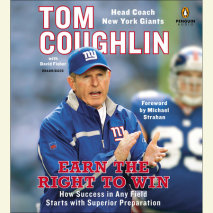 Earn the Right to Win
Author: Tom Coughlin | Narrator: Geoffrey Cantor
Release Date: March 05, 2013
An inspirational guide for leaders by the two-time Super Bowl-winning coach of the New York GiantsPreparation is easy to praise but very hard to master. No modern coach, in any sport, understands that better than NFL veteran Tom Coughlin. He led the ...
ABOUT THIS AUDIOBOOK
$17.50
ISBN: 9781101630273
Unabridged Download 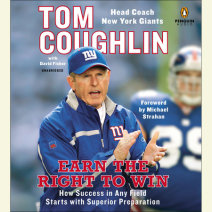