Barbara O’Neal is the author of a number of highly acclaimed novels, including the Target Club Pick How to Bake a Perfect Life and The Lost Recipe for Happiness, both of which won RITA awards, and placed her in the Romance Writers of America Hall of Fame. She sold her first novel in her twenties, and has also published under the names Barbara Samuel and Ruth Wind, and her books have been sold in Italy, Australia, New Zealand, France, Germany, and Poland. Barbara loves olive oil, peaches, good ale, gardening, and all big dogs. She’s also a long distance walker who traveled a portion of the Camino de Santiago de Compostela in 2010, and hopes to return to walk the rest in the near future. A native of Colorado, she now lives on the skirts of Pikes Peak with her partner, a British endurance athlete, and four animals who convinced her they needed rescue. 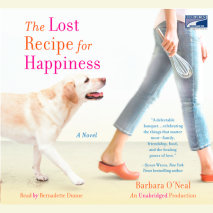 audio
The Lost Recipe for Happiness
Author: Barbara O'Neal | Narrator: Bernadette Dunne
Release Date: January 27, 2009
In this sumptuous new novel, Barbara O’Neal offers readers a celebration of food, family, and love as a woman searches for the elusive ingredient we’re all hoping to find. . . . It’s the opportunity Elena Alvarez has been waiting fo...
ABOUT THIS AUDIOBOOK
$22.50
ISBN: 9781415954485
Unabridged Download 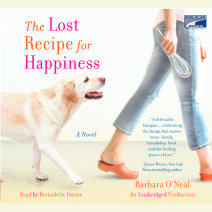