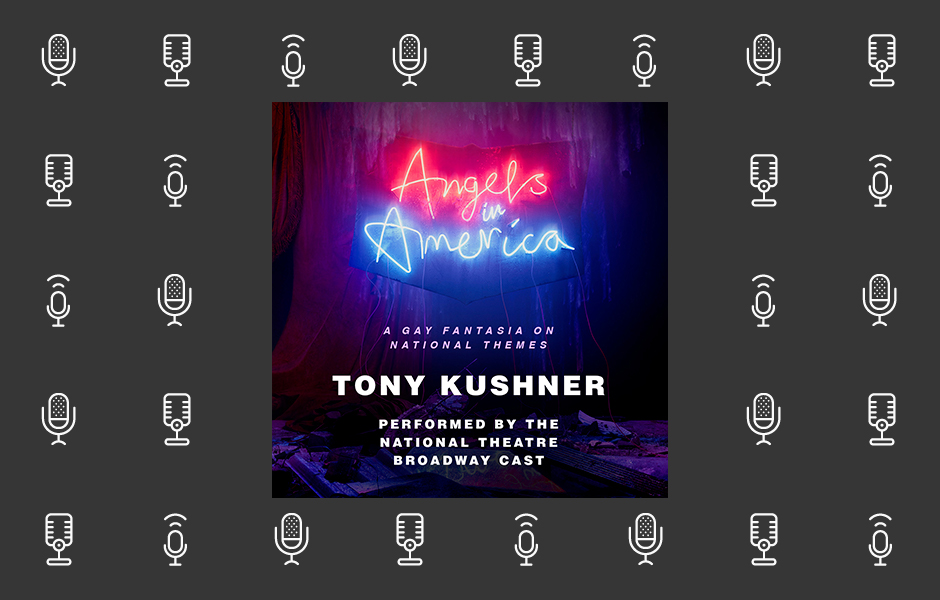 Greetings, theatre-lovers! The great work begins! The audiobook has arrived!
Tony Kushner’s acclaimed and award-winning play in two parts, Angels in America, is now available as an audiobook production that captures the theatrical experience in a new way, for a new type of audience. This must-have addition to your prized collection of Original Broadway Cast Recording albums is unlike any Broadway cast album you’ve had before. Here’s what you need to know about this unique listening experience.

Audiobook producers Karen Dziekonski and Dan Zitt spent hours listening to the edit and carefully refining every detail, from the actors’ pacing, to the pauses, to the highly-researched sound effects. They worked with post-production team Ted and Heather Scott who explain, “With Angels we endeavored to create an intimate experience, placing the listener right on stage between the actors, or invisible within the scene in their minds, by using occasional vocal effects, ambiences, and subtle stereo mixing to tie everything together. We wanted the sound of the Angel flying to be terrifying, like something that would make you want to run as fast as you can, even if you knew you could never get away. The challenge was to balance the real with the magical and mystical aspects of the play, knowing when to keep it simple and when to go all out.”

“If you didnâ€™t have the chance to see Tony Kushnerâ€™s Angels in America on Broadway, this is the next best thing…[the performances] are masterful.”—BookPage, audio review

You may also like:
Entertainment Weekly: “Thanks to the world of audio, New York theater is being revolutionized” (May 10, 2019) Includes 2 exclusive audio clips from Angels in America