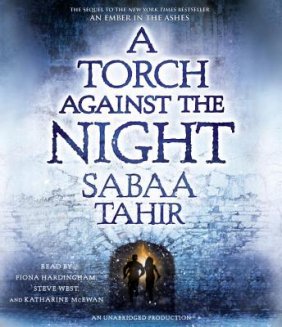 A Torch Against the Night: The Sequel Worth the Wait

The sequel to the powerhouse AN EMBER IN THE ASHES, A TORCH AGAINST THE NIGHT well lives up to the adventure. ItŌĆÖs easy to jump back into the fray alongside Elias, Laia, and the newest narrator Helene as they escape manipulation, death, and betrayal from the hands of the Commandant and the Empire.

Elias and Laia have been running from the Empire since the deadly events of the Fourth Trial at the end of the last story. They aim to get to Kauf prisonŌĆöone of the most┬Ādangerous places in the Empire ŌĆö┬Āto save LaiaŌĆÖs brother, a Scholar whose knowledge of weapon creation could be the thing that turns the tide in the war. But tracking them down are a whole host of enemies: the newly crowned Emperor Marcus, who wants nothing more than to see Elias dead; the Commandant, who will stop at nothing to control the Empire; the cruel Warden of Kauf, whose sadistic ways are plain deadly; and Helene, the EmpireŌĆÖs newest Blood Shrike, forced by Emperor Marcus to hunt down her dear friend Elias and bring back his head.

Through these three narrators, we discover the full story. HeleneŌĆÖs perspective really rounds out the narrative; we witness firsthand the corruption of the Empire and how bloody it has become under Emperor Marcus.

We also get both sides of the blossoming romance between Elias and Laia, which was hinted at in the first book. But between the two of them running for their lives, hiding from the Masks, and trying to outwit the cunning Commandant, romance is one of the last things on their minds. Will they end up getting to Kauf and finding LaiaŌĆÖs brother in time to turn the tide of the war, or will the Masks, led by EliasŌĆÖ closest companion Helene, catch them before they make it?

The audio production of A TORCH AGAINST THE NIGHT brings back the vocal talents of Steve West and Fiona Hardingham as Elias and Laia, and introduces Katharine McEwan as Helene. All three have incredible talent, being able to fully portray the range of emotions each character feels through these treacherous times. If you are a fan of the first story, AN EMBER IN THE ASHES, or just love a good YA Dystopian tale, this is the perfect listen for you.

Considering that there will be two more sequels in this story, you won’t want to miss out.