The Making of a Grammy-Winning Audiobook: Directing an Icon

We’re thrilled to welcome audiobook director, Jessica Kaye, to the PRHA blog, as she tells us about her experience directing the late, great Carrie Fisher for her Grammy Award-winning audiobook,THE PRINCESS DIARIST. Go behind-the-mic to hear about the fascinating directing process and what made this special recording a winning listen…


What makes a Grammy Award-winning audiobook?
A look at the past winners reveals there is a wide spectrum of answers to that question. It has to do with good writing, with good narration, at times it has to do with popularity and with timeliness. There is no one recipe for a winning audiobook but I can tell you the ingredients which helped make THE PRINCESS DIARIST by Carrie Fisher the 2018 winner of the Grammy Award for Best Spoken Word. 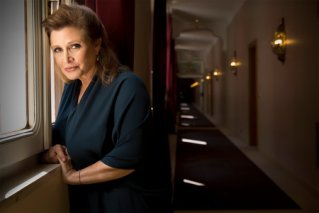 In October of 2016, Carrie Fisher was in a recording studio to narrate her soon-to-be-released memoir, THE PRINCESS DIARIST for her publisher, Penguin Random House Audio. The book is a charming portrait of the person she was in the 21st century versus the also charming much more naĂŻve young lady of 19 who starred as Princess Leia in Star Wars. On January 28, 2018,THE PRINCESS DIARIST and Carrie Fisher won the Grammy Award for Best Spoken Word Album.

The genesis of THE PRINCESS DIARIST was that Carrie found a journal she had kept during the making of the first Star Wars film. Her writing as a teenager was strikingly incisive and clear, a harbinger of the great writer she was to become. From the fortuitous discovery of 40-year-old notes came THE PRINCESS DIARIST. In it, she revealed a long-kept secret but, more than that, produced a moving and powerful work, juxtaposing the current Carrie against who she had been, a subject that touches all of us who are fortunate enough to live long enough to reminisce.

Carrieâ€™s book became all the more poignant when she died at age 60, just a few weeks after she and her daughter, Billie Lourd, finished recording the audiobook. Carrie wanted her daughter to record the journal entries, since Billie was close to the age Carrie had been when she wrote those notes. And who am I to write about Carrie and her work? I was her audiobook director for THE PRINCESS DIARIST. Thanks to Penguin Random House Audio producer Dan Zitt, I was hired to be the very fortunate woman on the other side of the glass from Carrie. It was my job to tell her when she misread something, or when there was a noise and we needed to do a retake; to take notes for her if she found an error in the manuscript; to go over her calendar to figure out when we could meet for another recording session, or to tell her that lunch had arrived.

I can anticipate your first question. Yes, Gary Fisher, Carrieâ€™s dog, was at the studio for each session. Yes, he is adorable and yes, he adored her.

Working with a celebrity is much like working with anyone, in terms of getting an audiobook recorded. They narrate the words while the computer records their voice. Working with someone who is recording their memoir, however, is special because it requires inherent respect for the narrator as the creator of the words as well as their delivery. Do you correct someone when they are reading their own work but say something for which you believe the inflection is incorrect? Well, yes, you do. That is a part of the directorâ€™s responsibilities. Carrie was easy to work with. She took comments and suggestions well but directors donâ€™t treat the process as a dictatorship. It is a collaboration. She and I would have conversations about why something may or may not work or whether something easily susceptible to interpretation when read needs a different sort of specificity when spoken aloud. Being a good audiobook director takes an ear for language and cadence and grammar, and an eye kept on the printed page at nearly all times to ensure a close match of the audio to the text. Yet, sometimes all of those things are thrown out the window and all that matters is what the author wants, especially if it well serves the project.

But Carrie was a dream to work with. She would engage with questions or suggestions, some from her and some from me. She was fun and whip-smart and personable and, considering I knew her for just a few days, I was completely in awe of her and smitten. The ingredients which made this audiobook a winner were two parts Carrie Fisher, one part Billie Lourd, and 100 percent alluring writing and performances.

LISTEN TO AN AUDIOBOOK CLIP: THE PRINCESS DIARIST


Jessica Kaye is an entertainment and publishing attorney at Kaye & Mills and a Grammy Award-winning audiobook producer. She serves on the boards of the Audio Publishers Association and the Southern California chapter of Mystery Writers of America(MWA). Jessica owns Big Happy Family, LLC, an audiobook distributor. She created and co-edited the anthology Meeting Across the River (BloomsburyUSA, 2005) and contributed a story to Occupied Earth (Polis Books, 2015) as well as to the new anthology, Culprits (Polis Books, 2018.) She is the author of the upcoming book, The Guide to Audiobooks (F+W Media/Writers Digest Books, 2019).
Stay Informed
about new audiobooks, interviews, contests, special offers and more from Penguin Random House Audio.