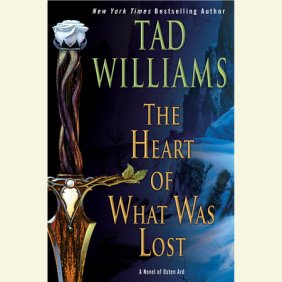 Epic Fantasy Dessert and Appetizer: The Heart of What Was Lost

After more than twenty years, Tad Williams is returning to the world of Osten Ard, which he created in the bestselling Memory, Sorrow, and Thorn trilogy. The Last King of Osten Ard trilogy is on the way in June, beginning with The Witchwood Crown. The series continues the story of Simon Snowlock, thirty years after he was crowned king following the events of MSaT. To bridge this considerable time gap, Williams has written The Heart of What Was Lost to set the stage for whatâ€™s to come in The Witchwood Crown. While MSaT was a coming-of-age epic, The Heart of What Was Lost is a relatively intimate war story that depicts two worn-down armies fighting a brutal campaign where one side faces complete extinction. Taking place directly after the events of To Green Angel Tower, the benevolent Human/Sithi alliance has saved the world and scattered the armies of their enemies, the Norns. The novella follows Duke Isgrimnur as he leads an army of Northern Rimmersmen to pursue the last of the Norns in an invasion of their harsh, frozen homeland, culminating in a brutal siege of their capital city, Nakkiga.

Both sides of the conflict are exhausted from war, but neither can back down. The human army is fighting to avenge the Nornsâ€™ invasion of their homelands and the deaths of friends and family. The Norns are fighting for their very existence. And the combat is brutal for each side. Isgrimnurâ€™s Rimmersmen wield gigantic stone-throwing catapults and battering rams that can destroy any obstacle, even the supernatural defenses of Nakkiga. The Norns, meanwhile, are super-human fighters, often killing scores of men for each one of their losses. But the Norns are vastly outnumbered ten to one. No matter how many humans the Norns kill, there are always more Rimmersmen reinforcements ready for battle. As the Rimmersmen lay siege to the last Norn city, you can feel just how close the Norns are coming to extinction, as they resort to more and more desperate measures to ensure their future survival. I wonâ€™t spoil the story by saying more, but the finale brings the campaign to a clear finish, while still leaving listeners with a lot to think about leading up to the release of The Witchwood Crown this June.

Iâ€™ll admit, I had mixed expectations for this audiobook. On the one hand, I was excited to revisit some characters from MSaT and to learn more about what happened after the ending of To Green Angel Tower. But on the other hand, bridge novellas like this often accomplish little more than to set the stage for the new series. And whatâ€™s an Osten Ard story without its new king Simon Snowlock? Thankfully, The Heart of What Was Lost stands on its own as a compelling fantasy tale without relying on foreshadowing to make an impact. Listening to Duke Isgrimnur and Sludig leading the campaign was like meeting old friends after a long time apart. And new characters like Sir Porto made a great impression. I might need to listen to this title again before The Witchwood Crown, as there are a few storylines that might continue in the new trilogy. The Heart of What Was Lost is like a dessert and an appetizer in one package: it wraps up some loose ends from Memory, Sorrow, and Thorn while hinting at more amazing Tad Williams fantasy to come. I, for one, canâ€™t wait for the next course.