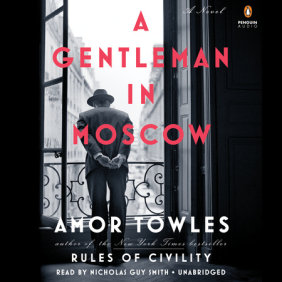 With the new paperback release of A Gentleman in Moscow by Amor Towles, PRH Audio is thrilled to take a look—and a listen!—back at the making of the audio production, brilliantly performed by Nicholas Guy Smith. Keep reading to learn how he approaches the art of audiobook narration and why he loved working on A Gentleman in Moscow—a truly transporting listen about a man, Count Alexander Rostov, who is ordered to spend the rest of his life inside a luxury hotel.

Nicholas Guy Smith on the recording: 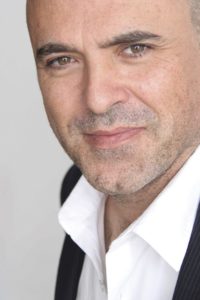 How lovely to read a book that is beautifully written! I was often moved and always delighted by the humor. The characters, even the minor ones, are so clearly defined they immediately come to life. This made it easier to cast the character voices.

When I prepare to narrate a book, I start by annotating the text on my iPad, underlining key words to emphasize, placing an arrow pointing downwards next to the last word of a line to indicate the sentence is about to end abruptly, or simply making a note for a dramatic pause. I then create a spreadsheet that includes the charactersâ€™ names, their descriptions, how many pages they speak, and then a note on â€ścasting.â€ť

If I have a dozen major characters to narrate, I focus on their backstory, and general attitude in each scene, and, especially, the conflict. Once I have some understanding of who they are, what they look like, their history, if available, I make choices regarding their voices. I keep in mind how attitude affects tonal quality or cadence. For the voice of the Count, I wanted it to have a smooth elegance and authority as well as a unique sensitivity. I was inspired by the voice of the late British actor, Sir Ralph Richardson, who also had the same playful spirit as the Count.

In my iPhone, I will record a few lines of each of the main characterâ€™s voice. When I am in the recording booth and about to speak the lines of a particular character, I will listen to their voice in my iPhone to remind me. I always keep the listeners in mind during the narration. How can I keep them connected to the story? When there is a passage that foreshadows a significant future event, what do I need to do to highlight that passage without being too obvious? I have a tendency to speak quickly, so I remind myself to slow down the reading, especially during moments of heightened suspense, allowing the reader to anticipate what will happen next. Of course, having a first-rate director there to answer questions and make insightful suggestions makes the whole experience so much more enjoyable.

A big part of my joy in narrating any audiobook is working with a director who comes to each recording session imbued with passion, positivity, and alive with creative ideas; someone who is intuitive and puts one at ease to explore, to make innovative choices without fear of judgment. I found that individual in Linda Korn whose brilliant direction made the narration process a very enjoyable one.


Listen to a clip:

Audio Praise for A Gentleman in Moscow:

â€śNothing demonstrates the pleasures of audiobook listening better than a fine novel narrated with sensitivity and understandingâ€¦A gifted narrator, Nicholas Guy Smith captures scene and character with expressive shadings of voice and toneâ€”a master performance that engages the listener from the start and illuminates Towlesâ€™s telling prose and subtle dialogue.â€ť—AudioFile Earphones Award

“Smith seduces listeners with the stylish, polished, and witty prose, and his stately reading of the leisurely paced story mirrors the pace of the countâ€™s constrained life. His inviting portrayal of characters and tone make this an appealing suggestion for literary- and historical-fiction fans alike.”—Booklist