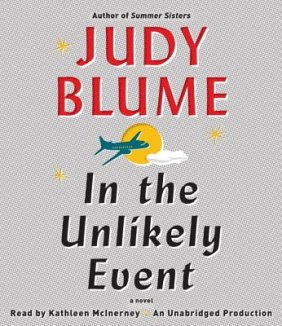 â€śLike many family stories, this one is not without its life-changing secrets and surprises. There is no surprise that the book is smoothly written, and its story compelling. The settingâ€”the early 1950sâ€”is especially well realized through period references and incidents.â€ť â€”Booklist (starred review)

In the author’sÂ own words, the novel is “based on a series of tragedies in the town I lived in when I was growing up, and the terrible time it was for the adults and the children, although the adults never talked to the children about it.” When three airplanes crashed in Elizabeth, New Jersey, within a three-month period, Newark Airport was closed for more than a year. Against this background, New York Times best-selling author Judy Blume uses her imagination to bring us the lives of three generations of families, friends, and strangers who will be profoundly affected by these events, either directly or indirectly.Â

Learn more about In the Unlikely Event.