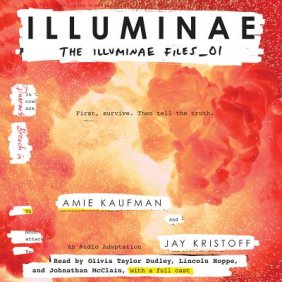 With 20 narrators and a special sound bed, the ILLUMINAE audiobook is out-of-this-world

Update May 2016: ILLUMINAE is the 2016 Audie Award winner for Multi-Voiced Performance! If you’ve seen a copy of ILLUMINAE, filled with scratched out emails and interview transcripts, you probably thought how are they going to bring this story to audiobook? Only the team at Listening Library could create a production this extraordinary. It’s Battlestar Galatica meets 10 Things I Hate About You and it’s unlike anything you’ve ever heard before.

Told through a series of hacked documents, ILLUMINAE by Amie Kaufman and Jay Kristoff is the story of the messiest break-up in the universe. Kady thought breaking up with Ezra was the hardest thing sheâ€™d have to do. That is, until their planet was invaded. Now the only person who can help her find the truth is the ex-boyfriend she swore she’d never speak to again.

This intergalactic adventure is brought to life by Olivia Taylor Dudley, Lincoln Hoppe, and Johnathan McClain, plus a full cast of 17 more narrators. ILLUMINAE also features a special “sound bed“—a mix of droning sounds and effects under certain voices. It’s not just music or sound effects—it’s more like a “sound theme” that ties the audiobook together.

Listening to the #Illuminae audiobook on a road trip today, and @OliviaDudley NAILS Kady. Sounds just like she did in my head! @LLAudiobooks

FUN FACT: Olivia Taylor Dudley will star as Alice in the upcoming adaptation of Lev Grossman’s The Magicians. She specially recorded the following message for IlluminaeFiles.com:


Hear for yourself why this production is truly something special:

Producer Janet Stark says, “Amie Kaufman and Jay Kristoff really understand audio. From start to finish, they offered brilliant suggestions for the translation of each page of ILLUMINAE with multiple POVs. This production broke all the rules. The shared excitement of everyone involved and the momentum of the story and its style worked wonders. From doubling up actors in the booth, to creating the Ghost ID character voice, to the space/pilot scenes and SFX and tweaking the pre-mixes, it has all my favorite ingredients. A truly remarkable project.”

@misterkristoff @LLAudiobooks @JanetStarkRH We are so happy to hear that! This book is something else. It's our all time favorite project.

Visit Storify.com to follow all the exciting ILLUMINAE news, including exclusive reveals, audio reviews, posts from the authors, and fan reactions.

Amie Kaufman also shared a photo of Johnathan McClain in the studio:

The #illuminae audiobook is coming, with a cast of TWENTY and awesome special effects! Here's the amazing Johnathan McClain (aka Ezra… aka Tarver to my These Broken Stars fans) busy recording! #illuminaefiles #audio #audiobook #bookstagram #booknerd #scifi #IreadYA #LoveOzYA

But don’t just take our word for it. Bestselling authors, critics, and fans everywhere are excited about ILLUMINAE:

Sci-Fi is not my favorite genre, but the Illuminae audiobook is fantastic! I feel like I'm watching a movie w/my eyes closed.

I'm think the cast of #Illuminae has ruined me for all other audiobooks. @penguinrandom

@AmieKaufman YAY! I read an ARC & fell in love & now I can't wait to experience it again as an audiobook! Already on hold at the library!

â˜… “What starts off as a spacefaring action-romance evolves into a nerve-wracking horror story…Kaufman (the Starbound trilogy) and Kristoff (the Lotus War series) offer a stylistically mesmerizing tale…”—Publishers Weekly, starred review

â˜… “Tightly woven and suspenseful…Kaufman and Kristoff have created a fast-paced, quasi-political sci-fi thriller that is completely unique. Hints of romance and references to Stanley Kubrickâ€™s 2001: A Space Odyssey interweave with the text.”—Booklist, starred review

“THIS WILL RUIN YOU FOR ALL OTHER AUDIOBOOKS! Seriously, I don’t know how I’m supposed to listen to another audiobook without this cast. They were fanfreakingtastic, each one bringing the characters to life in their own unique way. At times, I felt like I was watching a movie with my eyes closed. So, if audiobooks are your jam, BUY THIS ONE.”—Blogger Jenuine Cupcakes

“Alternately humorous, charming, horrifying and electrifying, ILLUMINAE is unforgettable and a game-changer for its genre.”—Shelf Awareness

“Brace yourself. Youâ€™re about to be immersed in a mindscape that youâ€™ll never want to leave.”—Marie Lu, bestselling author of the Legend trilogy

“This is one of those rare books that will truly keep your heart pounding …as you peel back the layers.”—Beth Revis, bestselling author of Across the Universe

“Stunningly creative. Smart, funny, and romantic. This is the book Iâ€™ve been waiting for.”—Veronica Rossi, bestselling author of Under the Never Sky