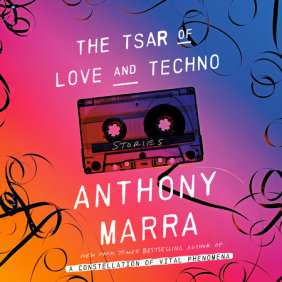 Love, Art, and Rebellion in THE TSAR OF LOVE AND TECHNO by Anthony Marra

I was a little disappointed to hear that Anthony Marra‘s follow-up to his stunning New York Times bestselling debut, A Constellation of Vital Phenomena, was a book of short stories entitled The Tsar of Love and Techno. I don’t normally love short story collections; itâ€™s hard to find a collection where every story is truly memorable. I always feel the need to delve deeper into characters or situations. Needless to say, I was worried that would be the case with The Tsar of Love and Techno. I was completely wrong. In this collection, the characters and their stories are subtly intertwined, making it feel like one continuous, grand novel.

Indeed, in an interview with NPR for The Tsar of Love and Techno, Marra explains,Â “I wanted the stories to feel so entwined that if you were to lose any one of them, the rest would sort of fall apart a little bit.” Their entwinement begins with a Soviet censor working in the 1930s. His task is to erase political dissidents from official images and artworkâ€”including his brother. He subversively begins drawing his brotherâ€™s image back into every picture he censors. This act of defiance ripples outward through the years, affecting each of the stories and characters that come after. Some of them include tales of a world-renowned ballerina, a reformed-thug-turned-solider, a blind restoration artist, a widow whose daughter left to be a mail order bride, and the young brother of a soldier killed in Chechnya.

Like in A Constellation of Vital Phenomena, there are heartbreakingly beautiful scenes of how everyday people live inâ€”and surviveâ€”times of war, times of political upheaval, and a cold uncaring world. A sense of loss and loneliness pervades each of the characterâ€™s lives, but they are often anchored by love (whether it is love of family, romantic love, or love of art) and buoyed by hope. Marra’s way of writing expresses all of that without being cliche. And when youÂ reach the end of the thread you’ve been following through each story, you’ll be left breathlessly hoping his next work of fiction will be just as brilliant.

Listen to an excerpt The Tsar of Love and Techno

Check out The Tsar of Love and Techno Mixtape Anthony Marra created on Spotify.

See what the critics are saying: