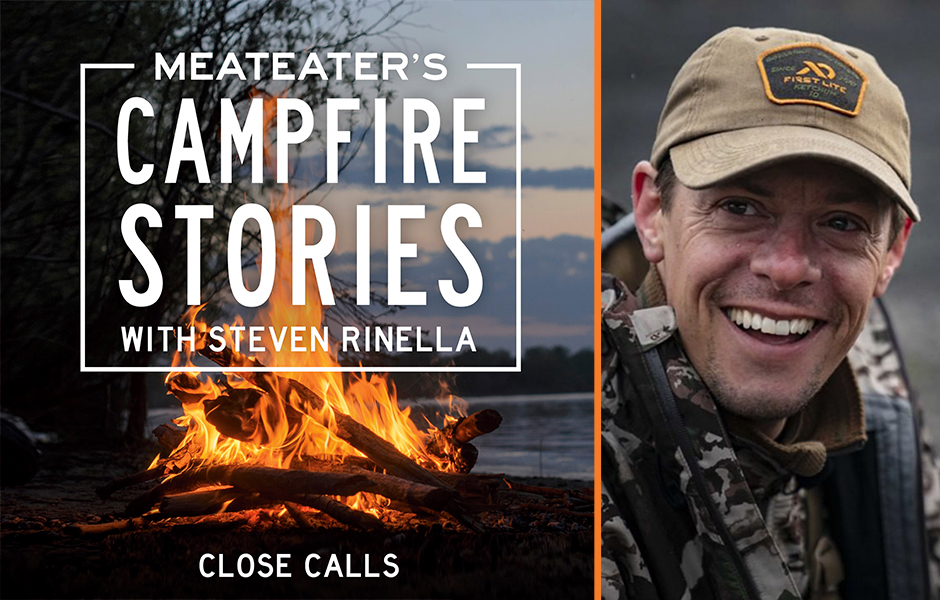 Gather around the fire: MeatEater’s Campfire Stories: Close Calls, an audiobook original with Steven Rinella, renowned outdoorsman, bestselling author, podcast host, and host of the Netflix series MeatEater, is out now. Rinella is joined by members of the MeatEater Crew and an array of additional contributors for this original collection of sixteen true stories of close calls in the outdoors, from encounters with grizzlies, to getting swept away by an avalanche, to being trapped in an underwater cave, and even a brush with an armed cartel during a fishing trip.

This audiobook original is a new element to add to MeatEaterâ€™s many projects, among them books (which have sold over a million copies and include the New York Times bestseller The MeatEater Guide to Wilderness Skills and Survival), TV, six chart-topping podcasts, online videos and articles, and commerce business through owned and operated brands First Lite, FHF Gear, and Phelps Game Calls.

Rinella says, “Long before I took cameras along on hunts, I took a pen and waterproof notebook. It was writing about the outdoors that earned me my first career paycheck. All along, I’ve been fortunate to continue writing books with Random House, which isn’t just a publisher for me, but a home. So, I’m delighted to be publishing an audiobook original with the Penguin Random House Audio team. Anyone who likes a crazy story about the wild, fun, and sometimes harrowing things that happen in the outdoors is going to enjoy this one.”

Listen to a clip of the audiobook:

Each narrating their own stories, the audiobookâ€™s contributors include:

Steven Rinella is an outdoorsman, writer, wild-foods enthusiast, and television and podcast host who is a passionate advocate for conservation and the protection of public lands. The host of the MeatEater podcast and Netflix original series, he is also the author of The MeatEater Fish and Game Cookbook: Recipes and Techniques for Every Hunter and Angler; two volumes of The Complete Guide to Hunting, Butchering, and Cooking Wild Game; Meat Eater: Adventures from the Life of an American Hunter; American Buffalo: In Search of a Lost Icon; The Scavengerâ€™s Guide to Haute Cuisine; and The MeatEater Guide to Wilderness Skills and Survival. His next book, Outdoor Kids in an Inside World: Getting Your Family Out of the House and Radically Engaged with Nature will be published in March 2022 as a Random House hardcover.