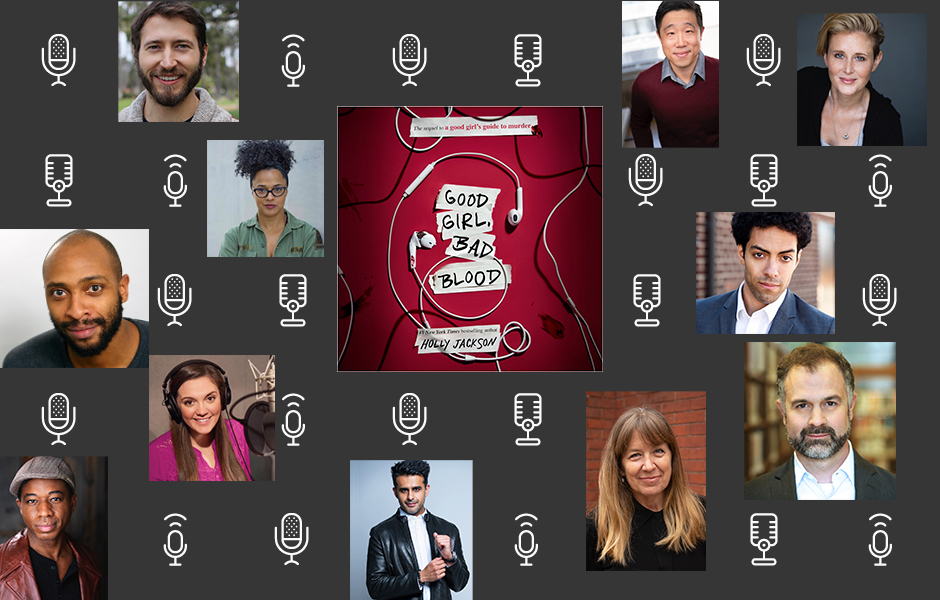 Good Girl, Bad Blood by Holly Jackson is the sequel to the international hit A Good Girl’s Guide to Murder, which follows clever teen detective Pippa Fitz-Amobi as she tries to crack a cold case for her big senior year project. Now, in book two, Pip has started a true crime podcast, but decided that her investigating days are behind her. Old habits die hard, though, and everything changes when a childhood friend suddenly goes missing.

Pip’s latest case is brought to life on audio by a full cast of talented narrators that voice interviewees for Pip’s podcast, newspaper journalists, and podcast fans with tips about the missing Jamie Reynolds.

We got the chance to catch up with main narrator and voice of Pip, Bailey Carr, about the process of recording an audiobook during a pandemic, collaborating with other narrators, and what she loves about the series:

On recording remotely: Technology makes remote recording pretty easy and fun. The only things that have changed much for me with the shift to remote recording are my shorter commute to the booth (from my bedroom to my office) and that lunch time looks a little different (instead of sharing a lunch table with my coworkers, I take my dog for a walk). Otherwise, I am still alone in the booth like old times, and I still hear the director and/or engineer in my headphones as they listen along and give thoughts and feedback. Sometimes we video chat in between chapters, and we are able to work together pretty seamlessly!

On being a full cast in the age of Zoom: One great thing about this series is that we recorded all of the multi-cast chapters on the first day of the project, so I was able to base all of my character voices for the rest of the recording off of hearing the other actorsā€™ performances on Day 1. We each recorded in our own studios while on a video call, so we were able to visualize and play off of each other, which is a fun and unique experience in audiobooks.

On being a fan of A Good Girl’s Guide to Murder : I love Pipā€™s tenacity and fearlessness and admire her dedication to purpose and justice. She is unstoppable in her pursuit of truth and is willing to ask tough questions of the people in her community. She has grown so much since Book 1: in her process, in her relationship to Ravi, in her sense of self and in her world view. The author, Holly Jackson, made Pip so relatable and relevant (she makes Reddit jokes and gave Pip a podcast in Book 2) which was a fun marriage of content and form for the audiobook and gave this project an extra layer of authenticity.

This is easily one of my favorite series Iā€™ve ever recorded, and I canā€™t wait to see where Holly takes Pip in Book 3: As Good As Dead! (Available in the US on September 28, 2021).

Bailey Carr is an Audie-nominated, Earphones Award-winning, and Voice Arts Award-winning audiobook narrator based in New York City. She is a Tennessee native and received a BFA in Acting from NYUā€™s Tisch School of the Arts.

MacLeod Andrews is a multiple award-winning audiobook narrator. He has starred in a number of independent short and feature films and is a member of the Rising Phoenix Repertory Company in NYC. Andrews has narrated many audiobooks, including The Omnivoreā€™s Dilemma, Testimony, and Your Fathers, Where Are They? And the Prophets, Do They Live Forever?

James Fouhey is an actor and AudioFile Earphones Awardā€“winning narrator living in New York City. He received classical training at Boston University and the London Academy of Music and Dramatic Arts. He has recorded more than 150 audiobooks across a variety of genres, including science fiction, fantasy, mystery, thriller, YA/teen, and biography and other nonfiction. James has even voiced a rapping kid dinosaur, much to the delight of his mom.

Neil Hellegers is an actor, narrator, and educator living in Brooklyn, New York. He has appeared in several commercials as well as various programs and films. Neil has also taught and performed numerous works of Shakespeare nationally and internationally.

Cary Hite is an actor and an Audie Award nominated, Earphones Award winning narrator from NYC. Since 2007, heā€™s had the pleasure of working with a number of publishing houses. Some notable credits include: Manchild: In the Promised Land, Four Hundred Souls, Pimp: The Story of My Life, The Future Is Yours, and My Grandmother’s Hands.

Amy Landon is a classically trained actress and audiobook narrator with over 300 titles recorded. She has a facility in dialects, which she coaches, and is an AudioFile Earphones Award winner and Audie nominee in humor, original work, and romance. Sheā€™s taught Voice & Speech at University of Missouri: Kansas City and the Stella Adler Studio in New York City. Her voice can be heard in commercials, video games, and film narration.

Raymond J. Lee is a New Yorkā€“based actor. In addition to narrating audiobooks, he has done voice-over work for Netflix, Dreamworks, and Disney Junior. Performances on Broadway include Groundhog Day, Honeymoon in Vegas, Anything Goes, and Mamma Mia! He has also performed off Broadway in Two Gentlemen of Verona and The Wild Party, and in regional theater. Raymondā€™s television appearances include Billions, Smash, The Jim Gaffigan Show, Fame, Red Oaks, and Ghost Town.

Keylor Leigh hails from the East Coast but adores West Coast life also. Her television credits include The Muppets, The Catch, Station 19, and Criminal Minds. She greatly enjoys voice acting and audiobook narration, and is proud to have narrated many audiobooks. Keylor loves the outdoors, MMA, motorcycles and her schnoodle, Lola.

Maggi-Meg Reed is a multiple Audie nominee and Earphones winner, most recently for the Betty Smith classic Joy in the Morning. Her extensive and acclaimed theatrical and musical background ā€“ from legendary Tom Oā€™Horganā€™s Broadway pop opera Senator Joe to restoration comedy and Irish classics at the Roundabout Theater to the downtown one-woman rock musicals Beyond the Window and Domestica ā€“ reflects a dramatic range and versatility that make her a powerful and adaptable narrator. In addition to the young adult thriller Good Girl, Bad Blood, her recent audio work ranges from contemporary fiction to mystery & suspense to personal growth to biography & memoir to American social history & culture to Shakespearean tragedy. She lives in Brooklyn.

Shezi Sardar is an actor, writer and producer, based in New York City. He has acted in numerous television shows such as The Punisher/Netflix, Blue Bloods/CBS, The Mysteries of Laura/NBC, Madam Secretary/CBS, Law & Order SVU, and other network productions. He served as an On-Air Announcer for WWE, providing broadcast commentary globally and for the India market. Shezi won the Outstanding Actor award at Tamasha, a New York South Asian arts and theatre festival (2016), and is an NBC Scene Showcase alum. Shezi’s work has been featured by HuffPo, Asian Culture Vulture, India.com, BBC Radio London, and Brown Girl Magazine. He is trained at the William Esper Studio and The Barrow Group, and founded Golden Turmeric, a production company that seeks to tell stories around the complexities of identity and culture.

Looking for more multi-narrator productions? Check out all of our Meet the Cast posts.