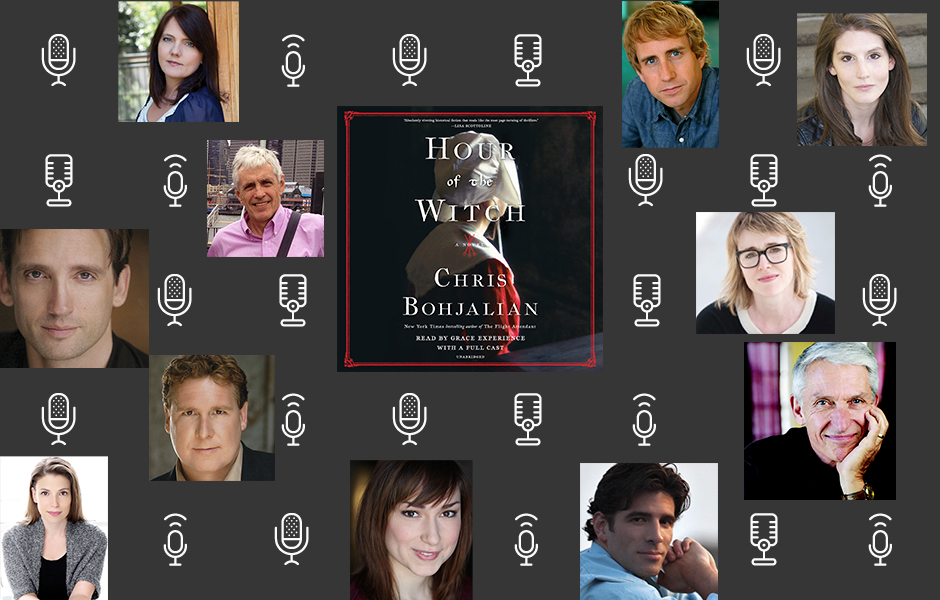 Meet the Cast: Hour of the Witch by Chris Bohjalian

Hour of the Witch, the new instant bestseller from author Chris Bohjalian, is the story of a young Puritan woman who plots her escape from a violent marriage, and finds herself at the center of rumors concerning devilish behavior.

BookPage writes that the riveting and propulsive tale “…is at once brilliantly idiosyncratic while also recognizable.” Now, meet the voices that bring the historical suspense of Mary Deerfield’s plight to life on audio:

Grace Experience studied acting at NYU’s Tisch School of the Arts. She has performed onstage in New York and New England, and most recently appeared on the HBO Max series The Flight Attendant.

Saskia Maarleveld is an AudioFile magazine Earphones Awardā€“winning narrator living in New York City. Working full-time in the voice-over world, Saskia has recorded over 160 audiobooks. She switches seamlessly between accents and can often be heard speaking in British, Australian, New Zealand, and various European accents, in addition to her own American accent.

Danny Campbellā€™s acting credits include the Actors Theatre of Louisville, the Utah Shakespearean Festival, Stage West, and the Mint Theatre in NYC. He is also a company member of The Independent Shakespeare Company in Los Angeles, has appeared in numerous commercials, and is currently an Adjunct Faculty member at Santa Monica College. In Hour of the Witch, Danny also reads the quotes for Isaac Willard.

Cassandra Campbell is a prolific audiobook narrator with more than 700 titles to date. Winner of four Audie Awards and nominated for a dozen more, she was a 2018 inductee in Audibleā€™s inaugural Narrator Hall of Fame. She has consistently been an AudioFile Magazine Best Narrator as well as a Publisherā€™s Weekly Best Narrator of the Year. As an acting teacher, she spent five years as a faculty member of the Los Angeles County High School for the Arts and has performed in and directed dozens of plays at theaters across the country. In Hour of the Witch, Cassandra also reads the quotes for Abigail Gathers.

Arthur Morey, an AudioFile Golden Voice narrator, has recorded close to 500 audiobooks and magazine pieces and directed dozens. He has written scripts and lyrics, often on commission, and performed onstage in New York, Chicago, and Milan. For 15 years he taught at Northwestern U. While managing a trade publishing company, he discovered audio.

Mark Deakinsā€™ television appearances include Buffy the Vampire Slayer and Star TrekĀ®: Voyager. His film credits include The Devilā€™s Advocate and Star TrekĀ®: Insurrection. He is the writer, director, and producer of the short film The Smith Interviews.

Julia Whelan is an actor, writer, and narrator of over 400 audiobooks. Recently named one of AudioFile magazine’s Golden Voices, she has won numerous other awards, including the 2019 Best Female Narrator Audie for Tara Westover’s Educated and a SOVAS for the performance of her own novel, My Oxford Year. She is also a Grammy-nominated audiobook director as well as a certified tea sommelier. In Hour of the Witch, Julia also reads the quotes for Constance Winston.

Kaleo Griffith‘s film and television work includes Oliver Stoneā€™s Talk Radio, Law & Order, Law & Order: SVU, Diagnosis X, As the World Turns, One Life to Live, and All My Children, among others. Griffith has recorded numerous audiobooks, along with many commercials and voice-overs. In Hour of the Witch, Kaleo also reads the quotes for Ward Hollingsworth.

Kirby Heyborne is an American musician and actor. After graduating from the University of Utah with a degree in economics, he received critical acclaim for his starring role in the award-winning World War II drama Saints and Soldiers. He has starred in many feature films and national commercials, and has appeared on Everwood and Free Ride. He is well known for his narration and voice work on several audiobooks. In addition, he can frequently be found touring the country with his singing and songwriting act. In Hour of the Witch, Kirby also reads the quotes for Valentine Hill.

Rebecca Lowman is a performer of stage, film, and television. In addition to playing the lead in Eve of Understanding, for which she won the best actress award at the 2006 Boston Film Festival, she has appeared in the television series Burn Notice, Private Practice, Criminal Minds, The Shield, Big Love, Without a Trace, Cold Case, and Will & Grace. In Hour of the Witch, Rebecca also reads the quotes for Peregrine Deerfield Cooke.

Mark Bramhall has performed off-Broadway, at venues nationwide, and extensively in film and television. He holds numerous honors for his narrations and has repeatedly been featured among AudioFile Magazineā€™s best readers of the year.

Find more full-cast productions to love. Check out our Meet the Cast series.