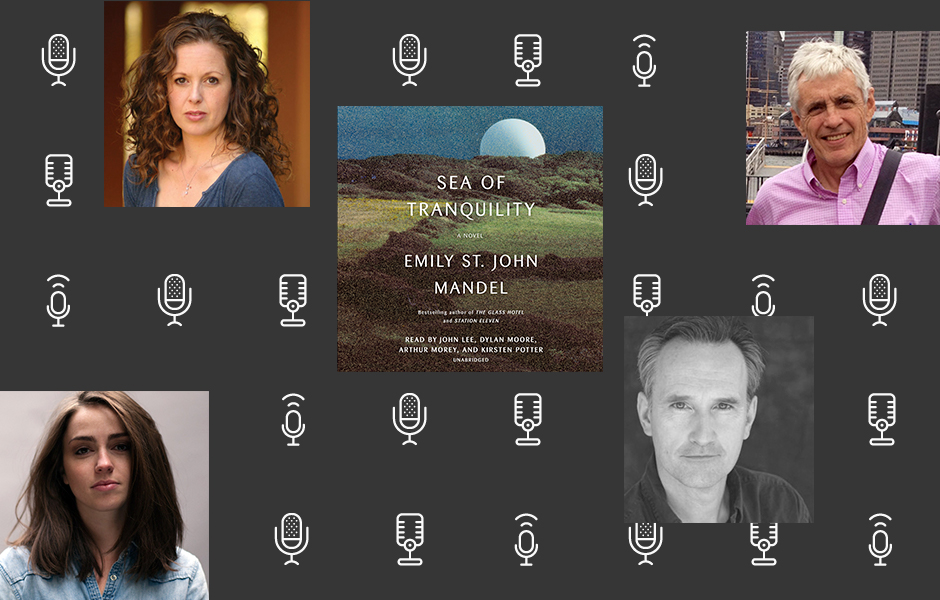 Sea of Tranquility is the newest audiobook from the award-winning, bestselling author, Emily St. John Mandel. The story takes the listener from Vancouver Island in 1912 to a dark colony of the moon three hundred years later, unfurling a story of humanity across centuries and space.

Any time we have an opportunity to produce audio for Emily St. John Mandel, we are in for something special. Each member of the cast brought their unique voice to the project. Kirsten and Dylan had each narrated one of the authorâ€™s previous novels and jumped at the chance to be part of Sea of Tranquility. Arthur and John did not know what to expect and were treated to something quite amazing. Though the narrators worked separately in different studios, the result was magic, and the tapestry was woven together perfectly.Dan Musselman, producer of Sea of Tranquility

Meet the voices of an audiobook that precisely captures the reality of our current moment:

John Lee has performed at the Mark Taper Forum in Los Angeles and the Globe Theatre in San Diego. He is the author of the plays Blood and Milk, Hitlerâ€™s Head, Passchendaele, Clean Souls, and Frankincense.

Dylan Moore, a Los Angeles native, attended The Juilliard School where she studied acting. Her acting credits include appearances in the TV show Blue Bloods, the films Opus and Submarine Kid, and the plays Age of Iron and Bachelorette. Dylan is also a producer, whose films include I Am a Seagull, Itâ€™s Freezing Out There, and The Decades of Mason Carroll.

Arthur Morey, an AudioFile Golden Voice narrator, has recorded close to 500 audiobooks and magazine pieces and directed dozens. He has written scripts and lyrics, often on commission, and performed onstage in New York, Chicago, and Milan. For 15 years he taught at Northwestern University. While managing a trade publishing company, he discovered audio.

Kirsten Potter has performed at theaters across the country, including the Geffen Playhouse, Mark Taper Forum, Laguna Playhouse, Seattle Repertory Theatre, and Arena Stage. Her film and TV work include Judging Amy, Bones, and The Eyes Have It; and she has voiced numerous roles for animation and video games. Kirsten has narrated numerous audiobooks, including Hattie Big Sky, If I Stay, Madapple, The Neighbor, Sammy’s House, and The Snowball. She has received three AudioFile Earphones Awards for her outstanding narration.

Find more full-cast productions to love. Check out our Meet the Cast series.