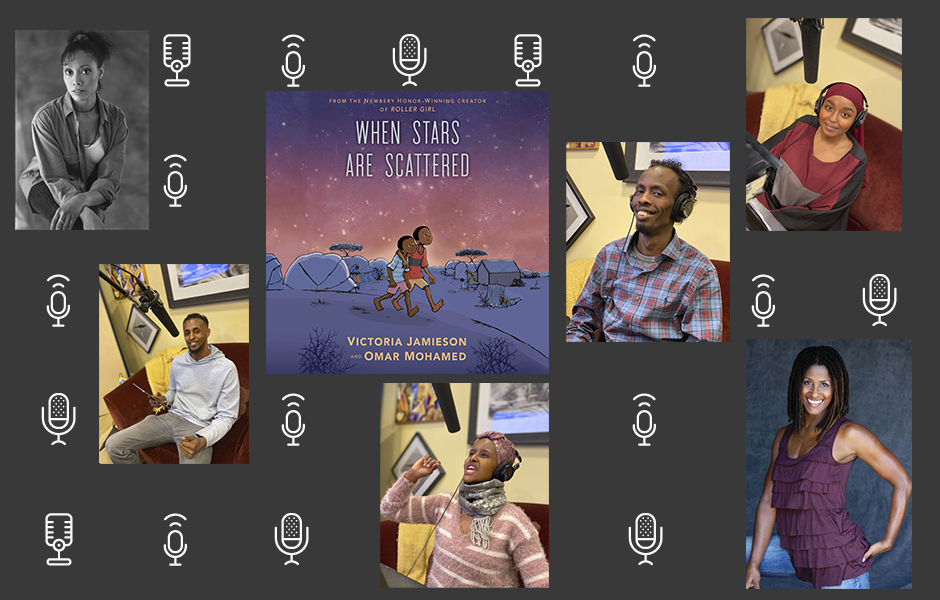 Meet the Cast: When Stars are Scattered

Heartbreak and hope exist together in When Stars Are Scattered. This remarkable graphic novel on audio is about growing up in a refugee camp, as told by Somali refugee Omar Mohamed to the Newbery Honor-winning creator of Roller Girl, Victoria Jamieson. Listen on to meet a selection of the talented cast members that bring this intimate, important, unforgettable story to life.

Faysal Ahmedis a Somali-American actor. He started acting at the Bedlam Theater in Minneapolis and worked as its Youth Program Coordinator in 2009. He first appeared in Captain Phillips in 2013, directed by Paul Greengrass, and an Academy Award nominee for Best Picture. Faysal then appeared in Astray in 2016, Watu Wote: All of Us (an Academy Award nominee for Best Short) in 2017, the Sony feature Sicario: Day of the Soldado in 2018, and in the hit Hulu original series Castle Rock.

Barkhad Abdi is a Somali-American actor and director. He made his debut in the film Captain Phillips, for which he received a BAFTA Award for Best Actor in a Supporting Role, as well as Academy Award and Golden Globe nominations.

Ifrah Mansour is a Somali, refugee, Muslim, multimedia artist and an educator based in Minnesota. Her work interweaves poetry, puppetry, films, and installations. She’s been featured in BBC, Vice, OkayAfrica, Star Tribune, and City Pages. Her critically acclaimed “How to Have Fun in a Civil War” premiered at Guthrie Theatre and toured to greater cities in Minnesota.

Filsan Said(she/her/hers) is a Somali-American actor, student, educator, and playwright based in Minnesota. She is currently a senior studying Geography, Theater Arts, African American and African Studies at the University of Minnesota: Twin Cities. She has worked with Pangea World Theatre, New Arab-American Theatre, the Playwrights Center, and the Guthrie Theater.

Bahni Turpin is a Los Angelesâ€“based audiobook narrator and actress with many television and film credits. Bahni is a two-time Odyssey Award winner and a two-time recipient of the Audie Award for Best Solo Female Narration. She was named an Audible Narrator of the Year in 2016, and The American Library Associationâ€™s Voice of Choice for 2017, and in 2018 she was inducted into the Audible Hall of Fame.

Robin Miles is a veteran of Broadway, classical plays, television, and film. She is an AudioFile Golden Voice, having won numerous Earphones Awards, ALA awards, and Audie Award nominations.

Looking for more full-cast audiobooks? Check out our archive of Meet the Cast posts here.