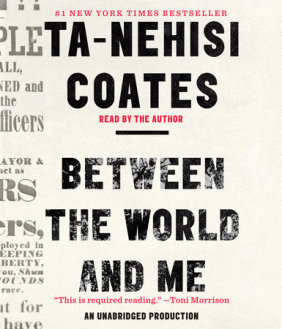 National Book Award Winner – Between the World and Me

If you needed another reason to listen to Between the World and Me by Ta-Nehisi Coates, here it is. This #1Â N.Y. Times bestseller has won the 2015 National Book Award for Nonfiction.

Between the World and Me, written as a letter to his son, continues Coatesâ€™ tradition of confronting our nationâ€™s history and ideals. He writes about inhabiting a black male body and how he found a way to live in his country and reckon with its fraught history. Written with a fire and eloquence that calls to mind the works of James Baldwin, Coates shares the story of his own awakening to the truth about his place in the world through a series of revelatory experiences.

The recipient of two standing ovations, Mr. Coates began his acceptance remarks with an acknowledgment of his editor Chris Jackson:Â  â€śThank you, Chris, thank you,â€ť and spoke movingly about the bookâ€™s editorial-process odyssey they took together.