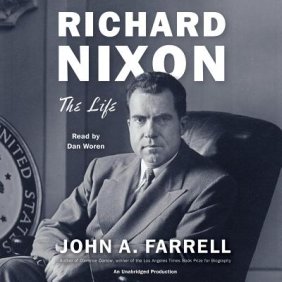 Richard Nixon‚Äôs farewell to his White House staff on August 9, 1974, hours before his resignation took effect, seems more poignant than ever: ‚ÄúAlways remember, others may hate you‚ÄĒbut those who hate you don‚Äôt win unless you hate them, and then you destroy yourself.‚ÄĚ

In Richard Nixon: The Life, John A. Farrell has written a captivating, extensively researched biography of the man who crawled and clawed his way to a world-altering tenure in the White House, only to see all he had built disintegrate beneath him in the lead-up to and aftermath of the Watergate scandal. In tracing the growth of the sickly Quaker boy on his father‚Äôs failed lemon farm and the persevering young man hell-bent on making up for tragic family losses, Farrell leaves no moment of Richard Milhous Nixon‚Äôs life unexamined.

Farrell leads us to question how a gifted, self-described nobody not only became president, but had a lasting effect on American society. Nixon‚Äôs complexities range from aggressive pursuit of perceived communist threats at home, as part of the House Un-American Activities Committee, to the 1952 Checkers speech, which saved his post as vice president. Once in the White House, he worked to initiate affirmative action, push desegregation forward, sign OSHA and Title IX, and create the EPA.

Nixon‚Äôs ascent and almost inevitable downfall play out like classic drama, with love, ambition, and tragedy as central themes. Dan Woren‚Äôs calm, direct narration and effortless phrasing are a fitting match for Farrell‚Äôs fluid writing style. Listeners easily follow Woren‚Äôs lead as Farrell‚Äôs text moves among events, issues, and all of the characters of Nixon‚Äôs life and administration.

Through all of this, we ask whether ‚ÄúTricky Dick‚ÄĚ was really misunderstood, as he claimed, or whether he was unable to truly understand himself, wavering instead between idealism and ruthless destruction. In his farewell, Nixon cautioned against the power of hate and division, yet his time in office, especially in his pursuit of the Silent Majority, can be held responsible for aggravating division across the country. Farrell provides a vehicle for understanding Nixon as a driving force of division in today‚Äôs world, a historical echo of the current political climate of Us versus Them, and the search for an enemy within.

Listen to an excerpt from the audiobook, narrated by Dan Woren:¬†¬†RICHARD NIXON