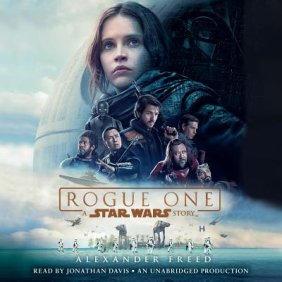 Rogue One Gives a Deeper Look to the Star Wars Universe

For Star Wars fans, Rogue One: A Star Wars Story is a crucial part in the Star Wars Universe. Set before Star Wars: A New Hope, Rogue One not only shows just how terrifying the infamous Death Star is, but how our famed heroesâ€”Luke, Leia, Han, and Chewbaccaâ€”managed to destroy it in the original trilogy. While the movie is a blockbuster hit, the audiobook can add another layer for the ultimate fan experience.

The Rogue One novelization goes deeper into scenes, characters, and other aspects of the Star Wars universe that the film only has a chance to touch upon. Within the novelization, you learn about the backstories of all the major characters, and even learn developments with minor characters that may have only run across the screen once.

Where did Baze and Chirrut meet, and what exactly do they do as Guardians of the Whills? What do K-2S0 and Bohdi Rook have in common? What crosses Cassian Andorâ€™s mind every time his finger goes to pull the trigger?

Rogue One introduces a large cast of characters. In a film, it can be difficult to go into each charactersâ€™ minds to understand their devotions. Listening to the audiobook, however, really gives the listener a chance to experience Rogue One with more flavor, color, and character depth. In the audio, listeners are guided through the emotional arc of all the characters, especially Jyn Erso, and really feel the struggles they face.

Also within the audio are supplemental data sections, filled with new content not found in the movie. Within them, listeners get more information on the Rebel Alliance, the Death Star, and updates to the Rogue One team. These extra chunks of information can help color in the gaps between Rogue One and A New Hope.

All of these reasons, combined with action-packed sound effects and Jonathan Davisâ€™s amazing narration, make Rogue One: A Star Wars Story an audiobook not to be missed.

Listen to an excerpt from Rogue One: A Star Wars Story, read by Jonathan Davis: ROGUE ONE