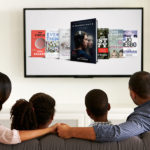 Nine Book Adaptations to Listen to Before Seeing Them On Screen in 2017 Submitted by Taraneh DJangi on February 3, 2017

Seeing book adaptations on screen (whether film or television) is always fun to do when you’ve readÂ the book. It’s also a great way to introduce the book to a wider audience. Take a look at nine upcoming adaptations that you should listen to before seeing them on screen. END_OF_DOCUMENT_TOKEN_TO_BE_REPLACED