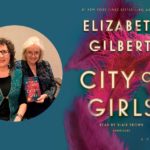 Pulling Back the Curtain of City of Girls with Narrator Blair Brown and Director May Wuthrich Submitted by Becca Stumpf on June 6, 2019

Take unfiltered youth, stir in equal parts sweet, bitter, and tart, strain through New York City, garnish with a flourish that brings down the house, and baby you got it: City of Girls by #1 New York Times bestselling author Elizabeth Gilbert. END_OF_DOCUMENT_TOKEN_TO_BE_REPLACED

Tagged: bookclub, City of Girls, elizabeth gilbert, historical fiction, new york city, theatre
Food, Cooking, and Life in Give a Girl a Knife Submitted by Taraneh DJangi on May 30, 2017

Cookbooks play a huge role in Amy Thielenâ€™s life. In her first book, the James Beard Award-winning cookbook The New Midwestern Table, Amy celebrates the hearty, from-the-earth cooking of her native Midwest. Now in her second book, Give a Girl a Knife, Amy shares her journey from childhood to adulthood, and how food was intertwined with it all. END_OF_DOCUMENT_TOKEN_TO_BE_REPLACED

Swing Time, the eagerly anticipated new novel from Zadie Smith and her first in four years, will not disappoint. END_OF_DOCUMENT_TOKEN_TO_BE_REPLACED

Open a bottle of wine and have a spread of fine cheeses to munch on as you listen to Stephanie Danlerâ€™s assured debut, Sweetbitter.

END_OF_DOCUMENT_TOKEN_TO_BE_REPLACED

New York Times bestselling author Melanie Benjamin‘s newest book is TheÂ Swans of Fifth Avenue. ItÂ is the story of Truman Capote and New Yorkâ€™s 1950s socialites: Slim Keith, C.Z. Guest, Gloria Guinness, Pamela Churchill, and Babe Paley. These women are otherwise known as New Yorkâ€™s â€śSwansâ€ť. In 1975, after years of friendship (particularly between Capote and Babe), Capote published a thinly veiled story about the Swansâ€™s deepest, darkest secrets–which left everyone reeling, and Capote ousted from their society. Melanie Benjamin writes meticulously and fantastically of this event, what led up to it, and how Capote and Babe became such fast, deep friends. END_OF_DOCUMENT_TOKEN_TO_BE_REPLACED