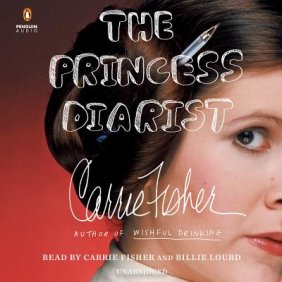 The Princess Diarist Shows A New Side of Carrie Fisher

The Princess Diarist is nominated for a 2018 GRAMMY Award for Best Spoken Word Album! Fisher recorded The Princess Diarist shortly before her passing last year along with her daughter Billie Lourd, who narrated the diary entries featured in the book. Check out our blog post to learn more.

When most people think of Carrie Fisher, they immediately connect her to the iconic Princess Leia from the Star Wars films. But how did Carrie get there? What made her want to be in the limelight and how did she react to being in such a blockbuster film? Listen to The Princess Diarist to learn all these answers and more.

One benefit to listening to the audio edition of The Princess Diarist is that you get to hear Carrie Fisher, with her raspy voice and no-nonsense commentary, tell you all about her life. From how she got hired onto the Star Wars set, to the steamy romance between her and Harrison Ford (a romance that she denied for years before mentioning in a recent interview with People Magazine), the audio is an incredible listen. You may find yourself cackling as Fisher gives her take on a story you thought you knew, but clearly did not unless you were there with the Star Wars cast.

The audio also includes diary entries from a young Carrie Fisher, which are read by her daughter Billie Lourd. These diary entries, written around the time the first Star Wars was filmed, illustrate another side of Fisher, with love poems and musings about her costar Harrison Ford and their relationship. The diary entries seem like those that a typical teenager would write instead of those written by one of the biggest stars in the world. These portray what young Fisher was like during the filming and how no one in the cast expected this film series to blow up like it did.

The Princess Diarist is a hilarious, quotable, and surprisingly raw look at Carrie Fisher and the filming of the first Star Wars film. Even if you think you know the whole story, thereâ€™s so much more to learn, and having Carrie Fisher be the one to tell you more isnâ€™t a bad way to spend a few hours.

Be sure to listen to Carrie Fisher in her episode of our podcast, THIS IS THE AUTHOR!