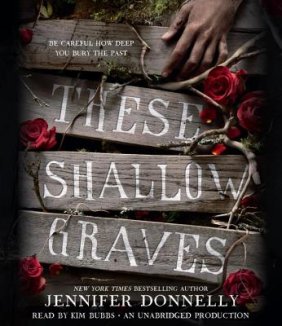 THESE SHALLOW GRAVES: A thrilling listen that will satisfy everyone

Ever since I listened to Jennifer DonnellyŌĆÖs newest book, THESE SHALLOW GRAVES, IŌĆÖve been talking about it non-stop. I was hooked from the very beginning and IŌĆÖm so excited for listeners to discover the pleasure of hearing this title expertly narrated by Kim Bubbs.

I first became hooked on JenniferŌĆÖs engaging and beautiful writing while listening to Revolution, a 2011 Odyssey Honor Winner. I was overjoyed when I heard she had a new book coming out, but she exceeded even my highest expectations. THESE SHALLOW GRAVES is a riveting and suspenseful mystery about dark secrets, dirty truths, and the lengths to which people will go for love and revenge. I have been recommending it to everyone I know since it’s widely appealing and crosses several genres. It’s got mystery, adventure, historical fiction, romance, and while easily accessible, the writing is also transportive. THESE SHALLOW GRAVES is a masterfully plotted and well-written story.

I was fortunate to have the chance to hear Jennifer Donnelly speak recently and she discussed how she was inspired by several historical ghosts. Jennifer couldnŌĆÖt resist asking questions to discover their stories. They led her back to 19th century New York and to the stories of all the characters in the book: Jo, Eddie, Oscar, and Fay. Read her Q&A with Publishers Weekly to learn more about her ghostly and historical inspirations.

Listeners will be transported back in time as they delve into this highly entertaining and historically factual story. Jennifer did extensive research to get the details just right—reading etiquette manuals, journals, and looking at photographs. The characters are very realistic and I particularly loved how strong the main protagonist Jo is, especially at a time when woman lacked equality and many of the freedoms girls today take for granted. ItŌĆÖs inspiring to hear how despite her fears, Jo is determined to push ahead and uncover the truth. Jennifer also spoke about some of the women she encountered in her research while writing THESE SHALLOW GRAVES—wealthy high society girls who were forced into marriages to keep and gain prestige, such as Edith Wharton and Consuelo Vanderbilt. She also recounted another story that stuck with her which she wove into the book: In the 1890s, if a girl was walking on the street alone at night, she was thought to be a prostitute. In fact, in her research, she found the case of a girl who was arrested after walking to her uncleŌĆÖs house alone, who had to prove at a trial that she was, in fact, not a prostitute.

THESE SHALLOW GRAVES is a great classroom tie-in and book club pick—the story flows quickly, and itŌĆÖs very thought-provoking. It lends itself to conversations about womanŌĆÖs equality, societal differences and expectations, and poverty. At the end of her speech, Jennifer pointed out that woman around the world still face many challenges, and we should continue to strive to provide all girls with access to a good education and equality in the workplace. These are topics that will be relevant to listeners everywhere.

Praise for THESE SHALLOW GRACES:

ŌĆ£Author Jennifer Donnelly returns with a powerhouse of a whodunit.ŌĆØ—BookPage Top Pick for Teens

Ōśģ “Fast-paced and thrilling…a smart, insightful, timely depiction of a young woman poised on the brink of a new world after the shattering of another.”—Booklist, starred review

“A fast-paced Gilded Age crime thriller that plunges its intrepid investigative-journalist heroine into the sordid underworld of nineteenth-century New York City and into her own family’s dark secrets.”—Julie Berry, Odyssey award-winning author of The Scandalous Sisterhood of Prickwillow Place

“These Shallow Graves delivered all that I adore: lovely prose, historical intrigue, unique chracters and setting. I devoured this book!”—Ruta Sepetys, New York Times bestselling author of Between Shades of Gray and Out of the Easy