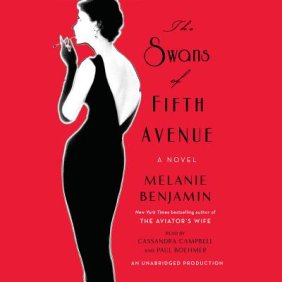 Truman Capote and The Swans of Fifth Avenue

New York Times bestselling author Melanie Benjamin‘s newest book is TheÂ Swans of Fifth Avenue. ItÂ is the story of Truman Capote and New Yorkâ€™s 1950s socialites: Slim Keith, C.Z. Guest, Gloria Guinness, Pamela Churchill, and Babe Paley. These women are otherwise known as New Yorkâ€™s â€śSwansâ€ť. In 1975, after years of friendship (particularly between Capote and Babe), Capote published a thinly veiled story about the Swansâ€™s deepest, darkest secrets–which left everyone reeling, and Capote ousted from their society. Melanie Benjamin writes meticulously and fantastically of this event, what led up to it, and how Capote and Babe became such fast, deep friends.

Narrating TheÂ Swans of Fifth Avenue are Cassandra Campbell and Paul Boehmer. The two split the narration which makes for an interesting listen. Each narrator has their own version of each characterâ€™s voice which brings out different facets of the character’s personality. Campbell and BoehmerÂ each, however, particularly excel with two different main characters. Campbell is the perfect Babe: soft, fragile, bone-tired and weary; Boehmerâ€™s Truman is what you imagine when you see pictures of Capote: flamboyant, shrewd, and, duringÂ times of confidence with Babe, stripped of his bravado. Listen to a clip:

The glitz and glamour of New York society in the 1950s and 1960s that we glimpse in TheÂ Swans of Fifth Avenue is alluring. The luscious parties, houses, and fashion are detailed wonderfully. The scenesÂ behind all of the glitz is even more beguiling. As Benjamin describes throughout the book, each woman had her own past and a climb up the social ladder that she didnâ€™t share readily. Truman, however, learns about them all through his friendship to each woman. Babe, as the central character and the one closest to Truman, is terribly lonely and sad. Her life as a trophy wife for Bill Paley, the head of CBS, is all about appearances. Their children donâ€™t even live with them in their New York apartmentâ€”they are taken care of by their nannies at one of the Paleyâ€™s homes outside the city. Trumanâ€™s own lonely upbringing is something that draws Babe and he together. The innermost fears and feelings they share make Capoteâ€™s story release in 1975 even more heartbreaking.

What is striking in Benjaminâ€™s imagined telling of Capote and the Swans is the theme of telling stories. She writes, â€śAs in the end, as in the beginning, all they had were the stories; the stories they told about one another and the stories they told to themselves.â€ť Sharing their own stories made them close to one another, but also set them apart. It made them vulnerable. So, is it a risk worth taking to share your life stories with someone you love? Will the sharing of it bring you closer (or will it betray you like in Babe’s case)? By not sharing anything, on the other hand, youâ€™re also facing dire consequences (in Babeâ€™s: severe sadness, loneliness, and a loss of self). Itâ€™s something weâ€™re left contemplating when the novel concludes.

To hear Melanie Benjamin discuss The Swans of Fifth Avenue (and more!), listen to the Beaks & Geeks podcast: