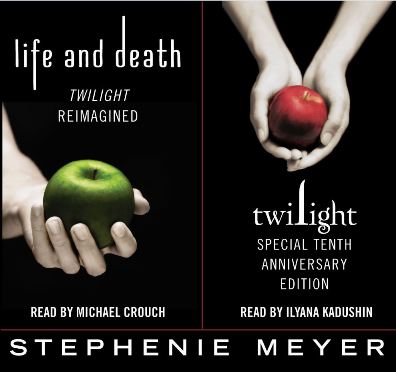 Celebrate the tenth anniversary of Twilight by Stephenie Meyer! The special new audiobook, LIFE AND DEATH, is a bold and surprising reimagining of the original Twilight with the characters‚Äô genders reversed. In LIFE AND DEATH, listeners will be thrilled to experience this iconic tale told through the eyes of a human teenage boy in love with a female vampire. Fans of Bella and Edward will not want to miss the opportunity to hear these iconic characters portrayed in intriguing new roles.

‚ÄúIt‚Äôs amazing to me that ten years have passed since Twilight was first published,‚Äù said Meyer. ‚ÄúFor me, this anniversary is a celebration of the fans, with all of their incredible passion and dedication. I‚Äôm excited to get to spend time with them again.‚Äù

Twilight has enraptured millions of listeners since its first publication in 2005 and has become a modern classic, redefining genres within young adult literature and inspiring a phenomenon that has had readers yearning for more. The novel was a #1 New York Times bestseller, a #1 USA Today bestseller, a TIME magazine Best Young Adult Book of All Time, an NPR Best-Ever Teen Novel, and a New York Times Editor‚Äôs Choice. The Twilight Saga also includes New Moon, Eclipse, Breaking Dawn, and The Short Second Life of Bree Tanner: An Eclipse Novella, all available on audio from Listening Library.

Hear Both Sides of this Epic Romance Narrated by Michael Crouch and Ilyana Kadushin
Catch them at NY Comic Con on Friday Oct 9th! Info here.