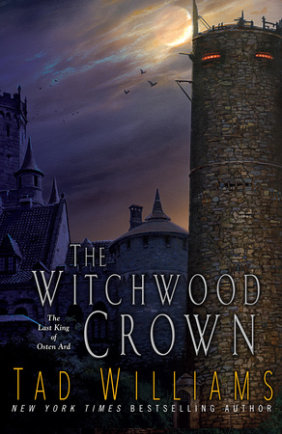 The Witchwood Crown: An Epic Return to a Classic Fantasy World

Twenty-four years is a long time to wait for a sequel. We have colleagues at the Penguin Random House offices who hadnâ€™t been born the last time Tad Williams published an Osten Ard novel. But now, twenty-four years after the original publication of To Green Angel Tower, we have the first entry in a new trilogy following the characters of the Memory, Sorrow, and Thorn trilogy that captured imaginations years ago. Twenty-four years have passed in Osten Ard as well, and although the cast is largely the same as that of the original trilogy, the world of Osten Ard has become very different indeed. The Witchwood Crown is the best kind of sequel: it expands on the characters and world that made the original series memorable, giving them a new adventure and an updated world to explore.Â

The Witchwood Crown picks up the story of Simon Snowlock, whose adventures saw him rise from a kitchen scullion to save the world and become the King of Osten Ard. In The Witchwood Crown, Simon is no longer the green, naive teenager we knewâ€”heâ€™s now an experienced king and grandfather, learning how hard it is to run an entire kingdom. Osten Ard is beset with raids in the South, rumors of demon worship in the West, and rumors of the return of the Norns, the supernatural Elf-like beings who nearly destroyed Osten Ard twenty years earlier. Luckily Simon doesnâ€™t have to deal with all of these problems by himself: he is joined by his wife, Miriamele; their grandson, Morgan, next in line to be king; and a host of returning characters. I wonâ€™t spoil any specifics, but almost every original character makes a return appearance, and the combination of old and new characters makes for a very rich cast.

The Witchwood Crown has everything you want in an epic fantasy: a stellar cast of characters, a minutely detailed world, and a thrilling plot. For fans of Memory, Sorrow, and Thorn, the new story is a chance to reconnect with old friends after a long absence. And thereâ€™s a brand-new cast of characters with even bigger conflicts to make new visitors to Osten Ard just as happy. At over thirty-eight hours, The Witchwood Crown should keep you occupied for a while. Hopefully we wonâ€™t have to wait another twenty-four years for the next sequel!