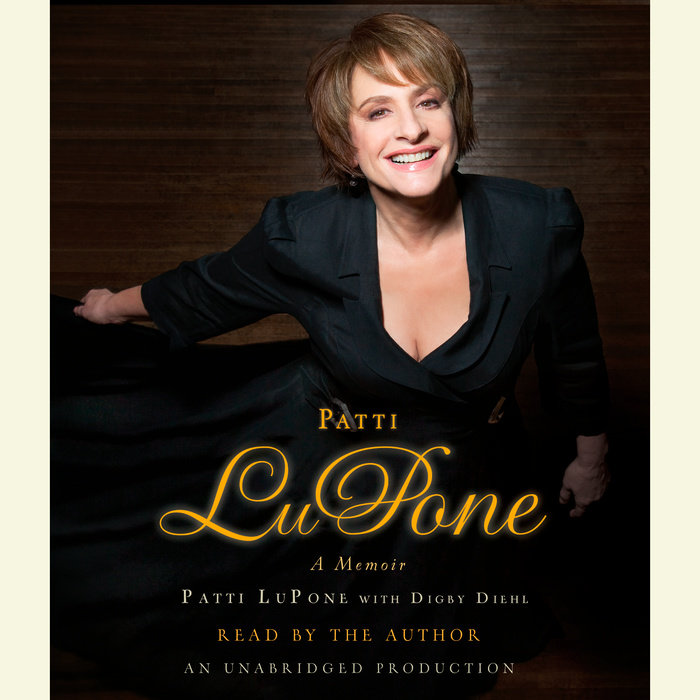 The legendary Patti LuPone is one of the theatre’s most beloved leading ladies. Now she lays it all bare, sharing the intimate story of her life both onstage and off--through the dizzying highs and darkest lows--with the humor and outspokenness that have become her trademarks.

With nearly 100 photographs, including an 8-page four-color insert, and illuminating details about the life of a working actor, from inspired costars and demanding directors to her distinct perspective on how she developed and honed her Tony Award–winning performances, Patti LuPone: A Memoir is as inspirational as it is entertaining. And though the title might say “a memoir,” this is ultimately a love letter to the theatre by a unique American artist.

Raised on Long Island’s North Shore, Patti discovered her calling at the age of four and knew that she was destined for the stage. A prodigiously gifted child, she was one of only 36 young actors chosen for the inaugural class of The Juilliard School’s Drama Division, where she fought near-constant criticism from her instructors, and here describes those early years with disarming frankness.

From the heady days of her early twenties—crisscrossing the country as a founding member of the classical repertory theatre ensemble, The Acting Company--to her early success on Broadway, her four-year stint as Libby Thacher on the television series Life Goes On, her loving marriage to Matt Johnston, and much, much more, Patti chronicles her professional and personal life with inimitable candor and wit.

With its insightful retrospective of her career-defining turns, both on Broadway and abroad, in Evita, Les Misérables, Anything Goes, Sunset Boulevard, Sweeney Todd, and Gypsy, Patti LuPone: A Memoir reveals the artist’s deeply felt passion for music and the theatre and is, in the end, the compelling and quintessential tale of an exceptional life well lived.

“I have been incredibly fortunate over the course of my career to have been associated with some extraordinary dramatic and musical productions, and also some rather spectacular disasters. Looking back, I can find gifts and life lessons in every one.”

Read More
"Patti’s story had me from the moment I turned to page one of the prologue until the absolutely triumphant final chapter....She tells it like it is, warts and all. And by the time I finished reading the last chapter, I found myself giving Patti a standing ovation in the privacy of my very own living room."
–Carol Burnett

"In her autobiography, LuPone, with characteristic wit and theatrical humor, recounts her life story, both when she was feeling like Les Miserables and when everything was coming up roses."
–Entertainment Weekly

"Every aspiring actor needs to read Patti LuPone's saga...In this book, she is hard-hitting, funny, candid, truthful and she bursts off the page as the same dynamo we often see onstage."
-Liz Smith, The Women on the Web

"Though personal and professional battles are charted, the tone is, like LuPone's conversational style, more chatty than catty, littered with earthy, often self-effacing humor...[A] mix of frankness and warmth."
–USA Today

"Patti LuPone, with honesty and humor, gives a brave and candid account of an astonishingly unique and brilliant performer’s journey to reach Broadway stardom."
–Angela Lansbury

“1. Opening night on Broadway, of a play of mine, I looked backstage, at half hour, for Patti - to wish her well. I found her in costume, onstage, asleep on the set, on a kitchen table. She woke up and explained that she was having a ‘Sicilian Anxiety Attack.’

2. Doing a play Off-Broadway, the actress playing a smallish role had to leave the cast unexpectedly. I called Patti for condolence and she said ‘I finish EVITA tonight, get me the script and I'll go on tomorrow.’

3. Similar stories of whatever it is which surpasses excellence and perfection of friendship abound, but you get the idea. I love her. And I love her book.”
–David Mamet

"Anyone who has seen Patti LuPone perform on stage is well aware of her daring, risk-taking artistry. Now she has channeled her considerable talent from the stage to the page and the result is a frank, funny and totally captivating memoir about her life on and off the stage."
–Jane Fonda

"For some rare performers, there is a place beyond commercial success, popularity with audiences, and honors within an industry. A special place where they are both respected and adored--even envied--by other performers for their wealth of talent. These are actors who sing, as opposed to singers who act. They bring an actor’s range of thought about character and truth and psychology.  Among them, none has more talent, more courage, and more emotive power than Patti LuPone.  When Patti LuPone comes on stage, you don’t always know what will happen, but you know it will be among the greatest work by any stage actress in theatre, ever. Ever. As everyone in our business knows, Patti…is Patti."
–Alec Baldwin

“One way we differ from other countries is we have no history of royalty....except on Broadway.  Hail to the Queen!  I love you like a sister Patti, and your memoir is one befitting the majesty of who you are."
–Joe Mantegna

"Ms. LuPone's voice and passion come through loud and clear. The book contains the same no-holds-barred attitude with which she attacks a role."
-Pittsburgh Post-Gazette

"Patti LuPone: A Memoir is a not-to-be-missed treat."
-Broadway.com

"This honest look at the trials and tribulations of making it as a Broadway star will be of interest to aspiring actors and those who love musical theater."
–Library Journal

“Award-winning actress LuPone shares the story of her life in the theater in this intimate and frank memoir… Patti chronicles her professional and personal life with relish. LuPone’s many fans will appreciate the insightful look at her career-defining roles in Evita, Les Misérables, and more. In these sections, LuPone chronicles her process for achieving these iconic performances in great depth and offers a frank perspective on the often unseemly business side of the theatrical world… LuPone ultimately reveals her deeply felt passion for theater and music.”
–Booklist
Read More