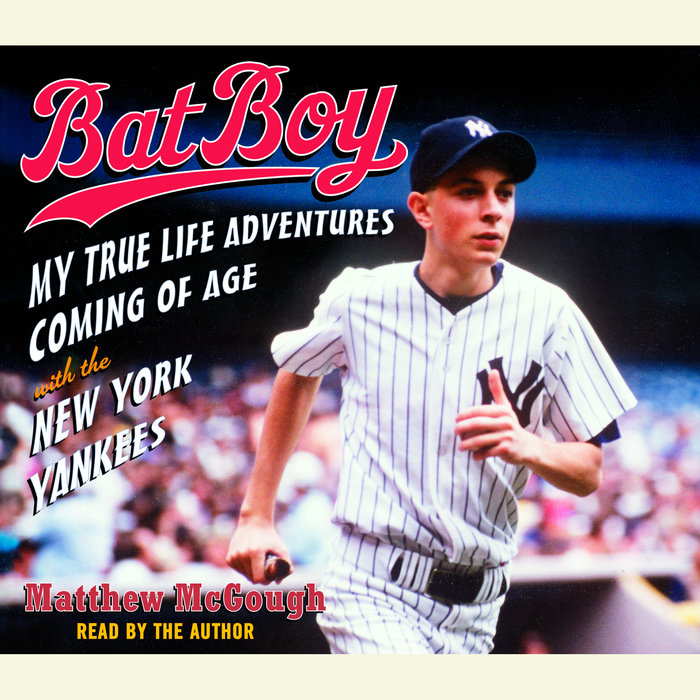 Written by: Matthew McGough
Read by: Jason Harris
4 Hours and 10 Minutes Imprint: Random House Audio Genre: Biography & Autobiography - Sports Release Date: May 03, 2005
School Library Journal Adult Books for Young Adults
Sixteen-year-old Matthew McGough was a fairly typical teenager, obsessed with getting through high school, girls, and baseball, not necessarily in that order. His passion for the New York Yankees was absolute, complete with a poster of his hero, Yankees first baseman Don Mattingly, hanging on his bedroom wall. Despite having no connections whatsoever with the ballclub, Matt dreamed of sitting in the dugout with the fabled Bronx Bombers. So, in the Fall of 1991, he wrote a letter in his very best penmanship to the New York Yankees asking for a position as a bat boy.

Miraculously, he got the job, and on April 7, 1992, Matt walked into the madness of the Yankee clubhouse on Opening Day. And there was Don Mattingly, Donnie Baseball himself, asking him to run an errand, an errand which soon induced panic in the rookie bat boy. Thus began two years of adventures and misadventures—from the perils of chewing tobacco while playing catch with the centerfielder, to being set up on a date by the bullpen, to studying for a history exam at 3:00 a.m. at Yankee Stadium, to his own folly as Matt gradually forgets he’s not a baseball star, he’s a high school student.

BAT BOY captures the lure and beauty of the American pastime, but much more it is a tale of what happens to a young man when his fondest dream comes true. Matthew McGough wonderfully evokes that twilight time just before adulthood, ripe with possibility, foolishness, and hard-won knowledge.
Read More
“Wonderful. . . . It should eventually find its way to that very short shelf of enduring sports nonfiction, perhaps somewhere between Ball Four and Friday Night Lights.” —Leigh Montville, author of Ted Williams and The Big Bam“A terrific memoir, combining an endearing coming-of-age story with a unique window on the inner world of baseball. It is warm, witty, shrewd, and entertaining from start to finish.” —Doris Kearns Goodwin“[McGough] writes fondly and opens a window that baseball fans rarely see.”—The Tampa Tribune“McGough provides humorous, often poignant, observations about Bronx Bombers legends.” —USA Today
Read More