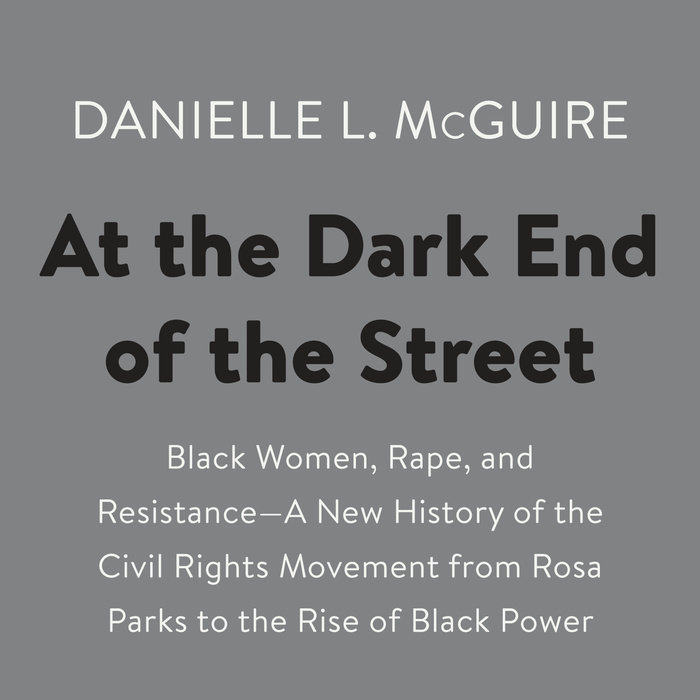 Rosa Parks was often described as a sweet and reticent elderly woman whose tired feet caused her to defy segregation on Montgomery’s city buses, and whose supposedly solitary, spontaneous act sparked the 1955 bus boycott that gave birth to the civil rights movement.

The truth of who Rosa Parks was and what really lay beneath the 1955 boycott is far different from anything previously written.

In this groundbreaking and important book, Danielle McGuire writes about the rape in 1944 of a twenty-four-year-old mother and sharecropper, Recy Taylor, who strolled toward home after an evening of singing and praying at the Rock Hill Holiness Church in Abbeville, Alabama. Seven white men, armed with knives and shotguns, ordered the young woman into their green Chevrolet, raped her, and left her for dead. The president of the local NAACP branch office sent his best investigator and organizer to Abbeville. Her name was Rosa Parks. In taking on this case, Parks launched a movement that ultimately changed the world.

The author gives us the never-before-told history of how the civil rights movement began; how it was in part started in protest against the ritualistic rape of black women by white men who used economic intimidation, sexual violence, and terror to derail the freedom movement; and how those forces persisted unpunished throughout the Jim Crow era when white men assaulted black women to enforce rules of racial and economic hierarchy. Black women’s protests against sexual assault and interracial rape fueled civil rights campaigns throughout the South that began during World War II and went through to the Black Power movement. The Montgomery bus boycott was the baptism, not the birth, of that struggle.

At the Dark End of the Street describes the decades of degradation black women on the Montgomery city buses endured on their way to cook and clean for their white bosses. It reveals how Rosa Parks, by 1955 one of the most radical activists in Alabama, had had enough. “There had to be a stopping place,” she said, “and this seemed to be the place for me to stop being pushed around.” Parks refused to move from her seat on the bus, was arrested, and, with fierce activist Jo Ann Robinson, organized a one-day bus boycott.

The protest, intended to last twenty-four hours, became a yearlong struggle for dignity and justice. It broke the back of the Montgomery city bus lines and bankrupted the company.

We see how and why Rosa Parks, instead of becoming a leader of the movement she helped to start, was turned into a symbol of virtuous black womanhood, sainted and celebrated for her quiet dignity, prim demeanor, and middle-class propriety—her radicalism all but erased. And we see as well how thousands of black women whose courage and fortitude helped to transform America were reduced to the footnotes of history.


"One one of those rare studies that makes a well-known story seem startlingly new. Anyone who thinks he knows the history of the modern civil rights movement needs to read this terrifying, illuminating book."

—Kevin Boyle, author of Arc of Justice: A Saga of Race, Civil Rights and Murder in the Jazz Age, winner of the National Book Award.


"McGuire restores to memory the courageous black women who dared seek legal remedy, when black women and their families faced particular hazards for doing so. McGuire brings the reader through a dark time via a painful but somehow gratifying passage in this compelling, carefully documented work."
—Publishers Weekly (starred)

"This gripping story changes the history books, giving us a revised Rosa Parks and a new civil rights story. You can’t write a general U.S. history without altering crucial sentences because of McGuire’s work. Masterfully narrated, At the Dark End of the Street presents a deep civil rights movement with women at the center, a narrative as poignant, painful and complicated as our own lives."
—Timothy B. Tyson, author of Blood Done Sign My Name: A True Story

"Just when we thought there couldn’t possibly be anything left to uncover about the civil rights movement, Danielle McGuire finds a new facet of that endlessly prismatic struggle at the core of our national identity. By reinterpreting black liberation through the lens of organized resistance to white male sexual aggression against African-American women, McGuire ingeniously upends the white race’s ultimate rationale for its violent subjugation of blacks—imputed black male sexual aggression against white women. It is an original premise, and At the Dark End of the Street delivers on it with scholarly authority and narrative polish."
—Diane McWhorter, author of Carry Me Home: Birmingham, Alabama, the Climactic Battle of the Civil Rights Revolution


"Following the lead of pioneers like Darlene Clark Hine, Danielle McGuire details the all too ignored tactic of rape of black women in the everyday practice of southern white supremacy. Just as important, she plots resistance against this outrage as an integral facet of the Civil Rights Movement of the 1950s and 1960s. This book is as essential as its history is infuriating."
—Nell Irvin Painter, author of The History of White People