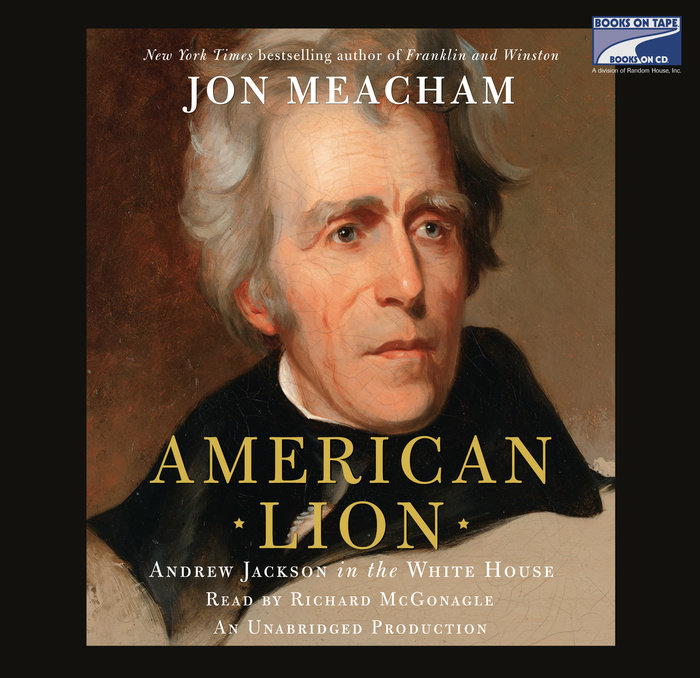 Andrew Jackson, his intimate circle of friends, and his tumultuous times are at the heart of this remarkable book about the man who rose from nothing to create the modern presidency. Beloved and hated, venerated and reviled, Andrew Jackson was an orphan who fought his way to the pinnacle of power, bending the nation to his will in the cause of democracy. Jackson’s election in 1828 ushered in a new and lasting era in which the people, not distant elites, were the guiding force in American politics. Democracy made its stand in the Jackson years, and he gave voice to the hopes and the fears of a restless, changing nation facing challenging times at home and threats abroad. To tell the saga of Jackson’s presidency, acclaimed author Jon Meacham goes inside the Jackson White House. Drawing on newly discovered family letters and papers, he details the human drama–the family, the women, and the inner circle of advisers– that shaped Jackson’s private world through years of storm and victory.

One of our most significant yet dimly recalled presidents, Jackson was a battle-hardened warrior, the founder of the Democratic Party, and the architect of the presidency as we know it. His story is one of violence, sex, courage, and tragedy. With his powerful persona, his evident bravery, and his mystical connection to the people, Jackson moved the White House from the periphery of government to the center of national action, articulating a vision of change that challenged entrenched interests to heed the popular will– or face his formidable wrath. The greatest of the presidents who have followed Jackson in the White House–from Lincoln to Theodore Roosevelt to FDR to Truman–have found inspiration in his example, and virtue in his vision.

Jackson was the most contradictory of men. The architect of the removal of Indians from their native lands, he was warmly sentimental and risked everything to give more power to ordinary citizens. He was, in short, a lot like his country: alternately kind and vicious, brilliant and blind; and a man who fought a lifelong war to keep the republic safe–no matter what it took.
Read More
“What passes for political drama today pales in the reading of Jon Meacham’s vividly-told story of our seventh president. The rip-roaring two-fisted man of the people, duelist, passionate lover, gambler and war hero, was also a prime creator of the presidency as the fulcrum of executive power to defend democracy…Meacham argues that Jackson should be in the pantheon with Washington, Jefferson and Lincoln for this and for his role in preserving the Union and rescuing democracy from elitism. He makes the historian’s case with wit and scholarship but Meacham also has the novelist’s art of enthralling the general reader much as David McCullough did for the lesser figure of John Adams. Reading “American Lion” one is no longer able to look on the gaunt, craggy face on the $20 bill without hearing the tumult of America in the making.”
--Tina Brown


“Jon Meacham's splendid new book on Andrew Jackson shrewdly places presidential politics in the context of Jackson's family life -- and vice versa. With an abundance of gripping stories, and with admirable fairness, Meacham offers a fresh portrait of one of the most controversial and consequential men ever to occupy the White House.”
--Sean Wilentz, Princeton University, author of The Rise of American Democracy: Jefferson to Lincoln


"Every so often a terrific biography comes along that shines a new light on a familiar figure in American history. So it was with David McCullough and John Adams, so it was with Walter Isaacson and Benjamin Franklin, so it is with Jon Meacham and Andrew Jackson. A master storyteller, Meacham interweaves the lives of Jackson and the members of his inner circle to create a highly original book."
--Doris Kearns Goodwin, author of Team of Rivals: The Political Genius of Abraham Lincoln


“In magnificent prose, enriched by the author’s discovery of new research materials, Jon Meacham has written an engrossing and original study of the life of Andrew Jackson.  He provides new insights into Jackson’s emotional and intellectual character and personality, and describes life in the White House in a unique and compelling way. Scrupulously researched and vividly written, this book is certain to attract a large and diverse reading public.”
--Robert V. Remini, National Book Award-winning historian and biographer of Andrew Jackson, Henry Clay, and Daniel Webster


"Finally, a book that explains our nation's most enigmatic hero, a man who was revered and reviled and little understood. Jon Meacham brilliantly takes us inside the family circle that sustained Andrew Jackson's presidency and provided his steadiness of faith. It's a vivid, fascinating human drama, and Meacham shows how the personal was interwoven with the political. Jackson presided over the birth of modern politics, and this book's brew of patriotism and religion and populism tastes very familiar. In helping us understand Jackson, Meacham helps us understand America."
--Walter Isaacson, author of Einstein: His Life and Universe and Benjamin Franklin: An American Life


"American Lion is a spellbinding, brilliant and irresistible journey into the heart of Andrew Jackson and his unforgettable circle of friends and enemies.  With narrative energy, flash and devotion to larger issues that are truly Jacksonian, Jon Meacham reveals Old Hickory's complicated inner life and recreates the excitement of living in Jackson's Washington.  Most of all, Meacham's important book shows us how the old hero transformed both the American Presidency and the nation he led."
–Michael Beschloss, author of Presidential Courage: Brave Leaders and How They Changed America 1789-1989


"An admiring, vividly composed portrait, full of colorful anecdotes and sentimental personal detail. Andrew Jackson's presidency remains controversial; but even those who, like myself, prefer John Quincy Adams's statesmanship to that of Old Hickory will find themselves engaged by Jon Meacham's skillful narrative."
--Daniel Walker Howe, author of What Hath God Wrought: The Transformation of America, 1815-1848, winner of the Pulitzer Prize for History 2008