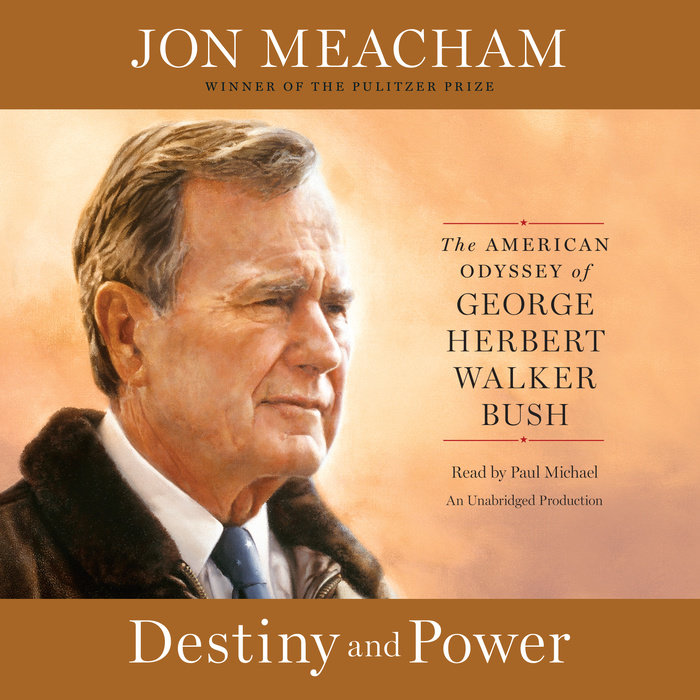 Drawing on President Bush’s personal diaries, on the diaries of his wife, Barbara, and on extraordinary access to the forty-first president and his family, Meacham paints an intimate and surprising portrait of an intensely private man who led the nation through tumultuous times. From the Oval Office to Camp David, from his study in the private quarters of the White House to Air Force One, from the fall of the Berlin Wall to the first Gulf War to the end of Communism, Destiny and Power charts the thoughts, decisions, and emotions of a modern president who may have been the last of his kind. This is the human story of a man who was, like the nation he led, at once noble and flawed.

His was one of the great American lives. Born into a loving, privileged, and competitive family, Bush joined the navy on his eighteenth birthday and at age twenty was shot down on a combat mission over the Pacific. He married young, started a family, and resisted pressure to go to Wall Street, striking out for the adventurous world of Texas oil. Over the course of three decades, Bush would rise from the chairmanship of his county Republican Party to serve as congressman, ambassador to the United Nations, head of the Republican National Committee, envoy to China, director of Central Intelligence, vice president under Ronald Reagan, and, finally, president of the United States. In retirement he became the first president since John Adams to see his son win the ultimate prize in American politics.

With access not only to the Bush diaries but, through extensive interviews, to the former president himself, Meacham presents Bush’s candid assessments of many of the critical figures of the age, ranging from Richard Nixon to Nancy Reagan; Mao to Mikhail Gorbachev; Dick Cheney to Donald Rumsfeld; Henry Kissinger to Bill Clinton. Here is high politics as it really is but as we rarely see it.

From the Pacific to the presidency, Destiny and Power charts the vicissitudes of the life of this quietly compelling American original. Meacham sheds new light on the rise of the right wing in the Republican Party, a shift that signaled the beginning of the end of the center in American politics. Destiny and Power is an affecting portrait of a man who, driven by destiny and by duty, forever sought, ultimately, to put the country first.

Praise for Destiny and Power

“Reflects the qualities of both subject and biographer: judicious, balanced, deliberative, with a deep appreciation of history and the personalities who shape it.”—The New York Times Book Review

“Destiny and Power reflects the qualities of both subject and biographer: judicious, balanced, deliberative, with a deep appreciation of history and the personalities who shape it. If Meacham is sometimes polite to a fault, Destiny and Power does not suffer for it. His kinder, gentler approach succeeds in making George H. W. Bush a more sympathetic—and more complex—figure than if the former president had written his own doorstopper after all.”—The New York Times Book Review

“Jon Meacham, who won a Pulitzer Prize for his biography of Andrew Jackson, put an enormous amount of work into this volume: nine years of interviews, full access to the diaries of George H. W. and Barbara Bush, and an open door to family members and friends. Add to this Meacham’s balanced journalism and smooth writing, and you have a fascinating biography of the forty-first president.”—The Dallas Morning News

“When we rank, reconsider, laud, or denounce past Presidents, living or dead, we are taking stock of our own times. In that sense, the vindication of George H. W. Bush is a reflection of what we know we’ve lost. Jon Meacham’s new biography of Bush, Destiny and Power, makes that plain from its very first pages.”—The New Yorker

“Graceful prose, backed by diligent mining of the archives and access to an oral diary that Bush dictated throughout his presidency . . . The story of the forty-first man to hold the office sheds light not only on the country we were, but the one we’ve become.”—Los Angeles Times

“Meacham is a superb historian and he weaves a compelling historical narrative, drawing heavily on Bush’s own contemporaneous diaries. The result is a fascinating behind-the-scenes glimpse into high-stakes decision making in a rapidly evolving world.”—The Seattle Times

“Through one man’s long journey through politics, we see America’s changing attitudes toward power and duty.”—Time

“Illuminating . . . written from Bush’s perspective but with a journalist’s rigor . . . George and Barbara Bush have provided extraordinary cooperation [for] an account of his life and presidency that has depth and value.”—USA Today (4 out of 4 stars)

“A gripping new biography of the forty-first president.”—The Economist

“Meticulously researched . . . a revealing biography that should serve as the starting point for future evaluations of the forty-first president.”—Kirkus Reviews

“The more time passes, the more the dust settles, the clearer it becomes that George H. W. Bush and the strengths of character he brought to his long service to this country deserve more attention and appreciation. And now comes Destiny and Power, Jon Meacham’s altogether fair, insightful biography of the forty-first president—a portrait made especially compelling by the author’s remarkable access to Bush’s private White House diaries. This is a timely, first-rate book!”—David McCullough

“What a spectacular and moving portrait this is—not only of a remarkably classy man but of the era that shaped him! It is hard to imagine a biographer more fitted than Jon Meacham to write what will surely be the definitive work on George Herbert Walker Bush.”—Doris Kearns Goodwin

“This astonishing book is both timely and timeless. Based on candid interviews and intimate letters and diaries, it provides a deep insight into the character of George H. W. Bush, flavored with colorful anecdotes depicting his relationships with people ranging from Gorbachev and Reagan to his sons George and Jeb. The result is a fascinating and insightful portrayal of the life of an exemplary American citizen.”—Walter Isaacson

“Jon Meacham’s timely and intimate biography of George Bush 41 is a welcome reminder of this modest president’s call to service, from the cockpits of World War II to the Oval Office and the end of the Cold War. Here you’ll meet a man of patrician manners, wartime heroics, Texas assimilation, party and personal loyalty, with a refined sense of power that carried him into history. Meet the George Bush you didn’t know.”—Tom Brokaw

“This riveting biography by the incomparable Jon Meacham gives George H. W. Bush his well-deserved place in history. Destiny and Power is full of surprises, revealing 41’s important role in scene after crucial historical scene of the past seven decades. President Bush used to say that he could never quite convey his “heartbeat” to Americans. Now, using a treasure of heretofore unseen diaries and other documents, as well as his own detailed interviews, Meacham takes us behind closed doors to show us what this sometimes misunderstood leader was really like.”—Michael Beschloss
Read More