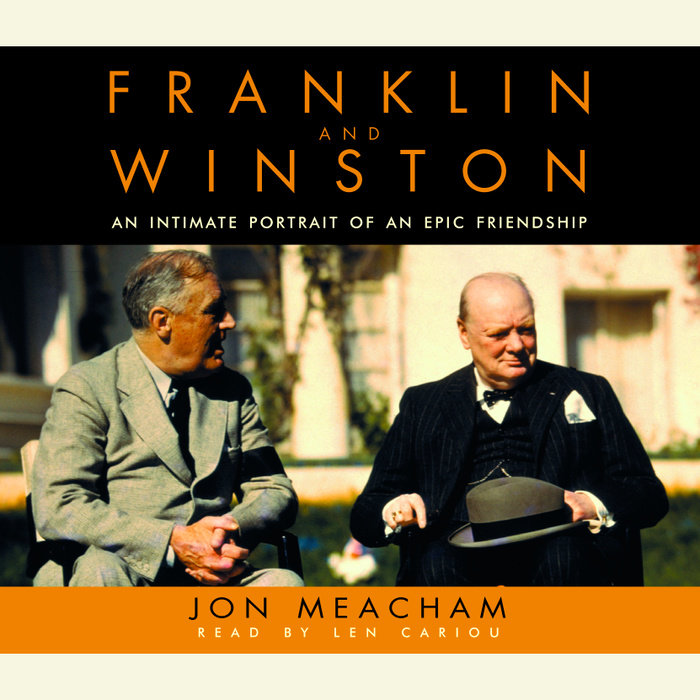 Franklin Roosevelt and Winston Churchill were the greatest leaders of “the Greatest Generation.” In Franklin and Winston, Jon Meacham explores the fascinating relationship between the two men who piloted the free world to victory in World War II. It was a crucial friendship, and a unique one—a president and a prime minister spending enormous amounts of time together (113 days during the war) and exchanging nearly two thousand messages. Amid cocktails, cigarettes, and cigars, they met, often secretly, in places as far-flung as Washington, Hyde Park, Casablanca, and Teheran, talking to each other of war, politics, the burden of command, their health, their wives, and their children.

Born in the nineteenth century and molders of the twentieth and twenty-first, Roosevelt and Churchill had much in common. Sons of the elite, students of history, politicians of the first rank, they savored power. In their own time both men were underestimated, dismissed as arrogant, and faced skeptics and haters in their own nations—yet both magnificently rose to the central challenges of the twentieth century. Theirs was a kind of love story, with an emotional Churchill courting an elusive Roosevelt. The British prime minister, who rallied his nation in its darkest hour, standing alone against Adolf Hitler, was always somewhat insecure about his place in FDR’s affections—which was the way Roosevelt wanted it. A man of secrets, FDR liked to keep people off balance, including his wife, Eleanor, his White House aides—and Winston Churchill.

Confronting tyranny and terror, Roosevelt and Churchill built a victorious alliance amid cataclysmic events and occasionally conflicting interests. Franklin and Winston is also the story of their marriages and their families, two clans caught up in the most sweeping global conflict in history.

Meacham’s new sources—including unpublished letters of FDR’ s great secret love, Lucy Mercer Rutherfurd, the papers of Pamela Churchill Harriman, and interviews with the few surviving people who were in FDR and Churchill’s joint company—shed fresh light on the characters of both men as he engagingly chronicles the hours in which they decided the course of the struggle.

Hitler brought them together; later in the war, they drifted apart, but even in the autumn of their alliance, the pull of affection was always there. Charting the personal drama behind the discussions of strategy and statecraft, Meacham has written the definitive account of the most remarkable friendship of the modern age.
Read More
“This is at once an important, insightful, and highly entertaining portrait of two men at the peak of their powers who, through their genius, common will, and uncommon friendship, saved the world. Jon Meacham’s Franklin and Winston takes its place in the front ranks of all that has been written about these two great men.“
—Tom Brokaw, author of The Greatest Generation

“Franklin and Winston is a sensitive, perceptive, and absorbing portrait of the friendship that saved the democratic world in the greatest war in history.”
—Arthur M. Schlesinger, Jr., author of The Age of Roosevelt

“Jon Meacham has done groundbreaking work by focusing on the World War II alliance between Franklin Roosevelt and Winston Churchill as a friendship. Using important new sources, he has brought us a shrewd, original, sensitive, and fascinating look at the many-layered relationship between these two towering human beings, as well as their friends, families, aides, and allies. The book reveals the emotional undercurrents that linked FDR and Churchill—and sometimes estranged them—and teases out which of the ties between them were heartfelt and which were based on raw mutual political need. Meacham triumphantly shows how lucky we are that Roosevelt and Churchill were in power together during some of the most threatening moments of the twentieth century.”
—Michael Beschloss, author of The Conquerors: Roosevelt, Truman and the Destruction of Hitler’s Germany, 1941–1945

“The relationship between FDR and Churchill was the most important political friendship of the twentieth century, not only determining the outcome of World War II but also setting a pattern that has endured ever since. Jon Meacham brings it to vivid life, shedding new insights into its strange and poignant complexity, and why its legacy has helped shape the modern world.”
—Richard Holbrooke, author of To End a War

“Jon Meacham enlivens the two men, their families, and their personal relations and relationships, providing a human context for the world-shaping leaders of the Anglo-American alliance during the Second World War.”
—Warren F. Kimball, author of Forged in War: Roosevelt, Churchill, and the Second World War
Read More