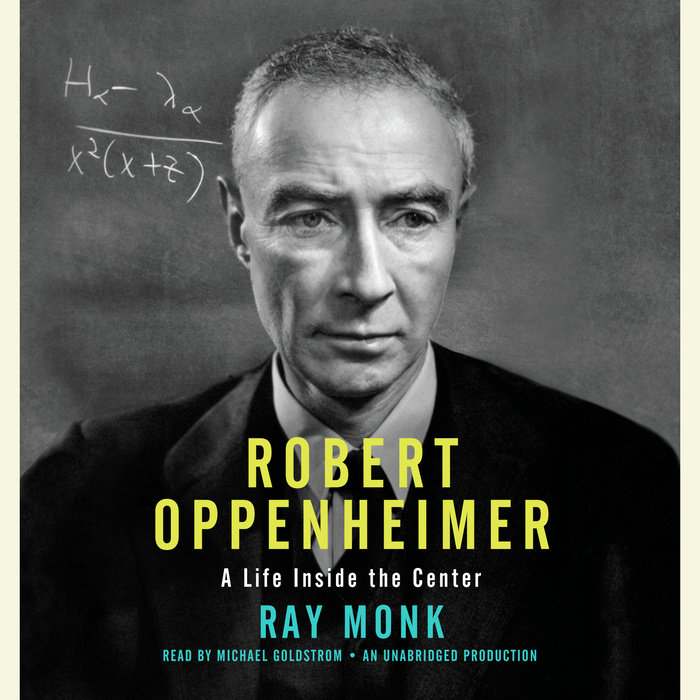 Written by: Ray Monk
Read by: Michael Goldstrom
35 Hours and 16 Minutes Imprint: Random House Audio Genre: Biography & Autobiography - Science & Technology Release Date: May 14, 2013
Robert Oppenheimer was among the most brilliant and divisive of men. As head of the Los Alamos Laboratory, he oversaw the successful effort to beat the Nazis in the race to develop the first atomic bomb—a breakthrough that was to have eternal ramifications for mankind and that made Oppenheimer the “Father of the Atomic Bomb.” But with his actions leading up to that great achievement, he also set himself on a dangerous collision course with Senator Joseph McCarthy and his witch-hunters. In Robert Oppenheimer: A Life Inside the Center, Ray Monk, author of peerless biographies of Ludwig Wittgenstein and Bertrand Russell, goes deeper than any previous biographer in the quest to solve the enigma of Oppenheimer’s motivations and his complex personality.
The son of German-Jewish immigrants, Oppenheimer was a man of phenomenal intellectual attributes, driven by an ambition to overcome his status as an outsider and penetrate the heart of political and social life. As a young scientist, his talent and drive allowed him to enter a community peopled by the great names of twentieth-century physics—men such as Niels Bohr, Max Born, Paul Dirac, and Albert Einstein—and to play a role in the laboratories and classrooms where the world was being changed forever, where the secrets of the universe, whether within atomic nuclei or collapsing stars, revealed themselves.
But Oppenheimer’s path went beyond one of assimilation, scientific success, and world fame. The implications of the discoveries at Los Alamos weighed heavily upon this fragile and complicated man. In the 1930s, in a climate already thick with paranoia and espionage, he made suspicious connections, and in the wake of the Allied victory, his attempts to resist the escalation of the Cold War arms race led many to question his loyalties.
Through compassionate investigation and with towering scholarship, Ray Monk’s Robert Oppenheimer tells an unforgettable story of discovery, secrecy, impossible choices, and unimaginable destruction.
Read More
"[Monk] writes well and provides a convincing portrait of Oppie’s success and his ambivalence after the bombs were dropped on Japan. Monk gives equally detailed coverage of the postwar years of Oppenheimer’s national celebrity, followed by a gathering storm over his past and his questioning of the H-bomb ... Monk’s biography is judicious, comprehensive and reliable, and bids fair to become one of the two most important lives of Oppenheimer. It certainly puts science back squarely in the middle of that life."—Washington Post

“It's not just brilliant, original and the best biography of Oppenheimer to date, it's epic. Also totally gripping and immensely satisfying. I didn't want it to end! I've read so much about Oppenheimer, but this is the first time I felt I understood why what happened to him happened.”
—Sylvia Nasar, author of A Beautiful Mind and Grand Pursuit: The Story of Economic Genius

“The inspired philosophical biographer of Wittgenstein and Bertrand Russell now turns his attention to the nuclear physicist J. Robert Oppenheimer and the profound human dilemmas of American science and the atomic bomb. This is an eagerly awaited and important book which will explore new boundaries in the writing of biography itself.”
—Richard Holmes, author of The Age of Wonder

"In this deeply humanizing biography, Monk invites readers to contemplate the unexpected evil—and good—in the man known as the "father of the A-bomb." ... Monk delves deeper than any predecessor into Oppenheimer's inner life ... perceptive and detailed, this portrait illuminates a potent but complex mind."
—Booklist, starred review

"A highly detailed examination of the life and times of Robert Oppenheimer ... Monk does full justice to Oppenheimer's irreplaceable contribution to the development of nuclear energy during and after World War II ... A top-notch biography."
—Kirkus Reviews, starred review

“Ray Monk’s Robert Oppenheimer does what nothing so far written on the enigmatic physicist has attempted: integrating into a seamless whole a profound inquiry into the formative influences on Oppenheimer’s character, a definitive account of his complex role in the development of the atomic bomb and a penetrating analysis of the philosophical implications of the new physics. It is not just a great biography but a powerful work of art.”
—John Gray, New Statesman

“A triumph of historical investigation … It is the most personal and sensitive biography of Oppenheimer so far published; the man himself rises from the pages, a figure worthy at times of reverence, but often of contempt. We can now understand why some colleagues and students revered him and why those outside his chosen circle often despised him. He could be warm, funny, kind, charming and supportive, yet his cruelty was legendary and his ego immense. Oppenheimer’s great weakness was his addiction to power, which perhaps explains his flexible morality.”
—Gerard DeGroot, The Telegraph

“A tour de force … [it] will establish itself as the definitive biography.”
—Lisa Jardine, Financial Times

"[Monk’s] 800 pages of deep research and lucid prose constitute a masterclass in how biography, done well, gets us closer to the mindset of an age than any other kind of inquiry."
—Kathryn Hughes, Guardian

“An extraordinarily rich biography, superbly researched and written with impressive clarity. It is a considerable achievement of scholarship.”
—Graham Farmelo, The Times
Read More