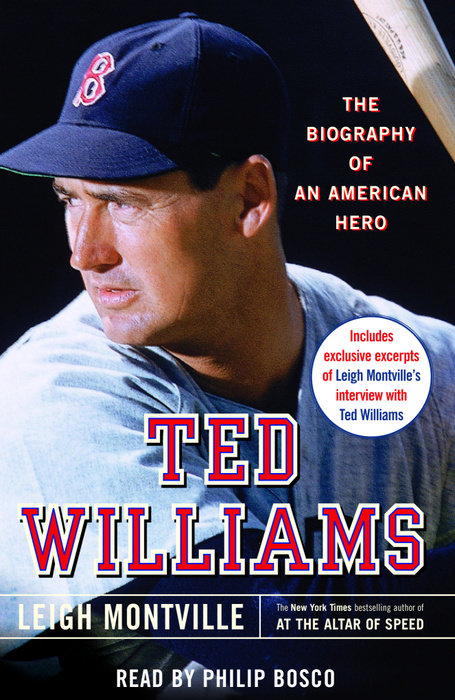 He was The Kid. The Splendid Splinter. Teddy Ballgame. One of the greatest figures of his generation, and arguably the greatest baseball hitter of all time. But what made Ted Williams a legend – and a lightning rod for controversy in life and in death? What motivated him to interrupt his Hall of Fame career twice to serve his country as a fighter pilot; to embrace his fans while tangling with the media; to retreat from the limelight whenever possible into his solitary love of fishing; and to become the most famous man ever to have his body cryogenically frozen after his death? New York Times bestselling author Leigh Montville, who wrote the celebrated Sports Illustrated obituary of Ted Williams, now delivers an intimate, riveting account of this extraordinary life.

Still a gangly teenager when he stepped into a Boston Red Sox uniform in 1939, Williams’s boisterous personality and penchant for towering home runs earned him adoring admirers--the fans--and venomous critics--the sportswriters. In 1941, the entire country followed Williams's stunning .406 season, a record that has not been touched in over six decades. At the pinnacle of his prime, Williams left Boston to train and serve as a fighter pilot in World War II, missing three full years of baseball. He was back in 1946, dominating the sport alongside teammates Dominic DiMaggio, Johnny Pesky, and Bobby Doerr. But Williams left baseball again in 1952 to fight in Korea, where he flew thirty-nine combat missions—crash-landing his flaming, smoke-filled plane, in one famous episode.

Ted Willams's personal life was equally colorful. His attraction to women (and their attraction to him) was a constant. He was married and divorced three times and he fathered two daughters and a son. He was one of corporate America's first modern spokesmen, and he remained, nearly into his eighties, a fiercely devoted fisherman. With his son, John Henry Williams, he devoted his final years to the sports memorabilia business, even as illness overtook him. And in death, controversy and public outcry followed Williams and the disagreements between his children over the decision to have his body preserved for future resuscitation in a cryonics facility--a fate, many argue, Williams never wanted.

With unmatched verve and passion, and drawing upon hundreds of interviews, acclaimed best-selling author Leigh Montville brings to life Ted Williams's superb triumphs, lonely tragedies, and intensely colorful personality, in a biography that is fitting of an American hero and legend.
Read More
“It is unlikely that any reader could view Ted Williams as just a ballplayer ever again.” — New York Times Book Review

“Exceptional.  Montville on Ted Williams is can’t-miss, one of America’s best sportswriters weighing in on one of the last century’s most intriguing figures.  A great read.” —Chicago Tribune

“Leigh Montville reaches a threshold even the mighty Williams could never touch:  perfection. The beauty of Montville’s work is that it is not a baseball book, per se, so much as the life and times of an oft perplexing, always fascinating man.” —Newsday

“A comprehensive look at a gargantuan life.” —People
Read More