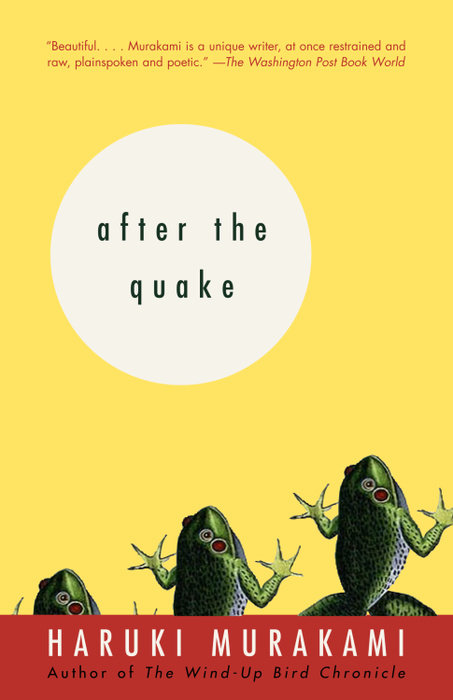 In 1995, the physical and social landscape of Japan was transformed by two events: the Kobe earthquake, in January, which destroyed thousands of lives, and the poison-gas attacks in the Tokyo subways in March, during the morning rush hour. Following these twin disasters, Haruki Murakami abandoned his life abroad and returned home to confront his country’s grief. The subway attack led to his recent Underground. And out of the quake come these six stories, set in the months between natural catastrophe and man-made terrorism. His characters find their resolutely normal everyday lives undone by events even more surreal (yet somehow believable) than we have come to expect in his fiction.

An electronics salesman, abruptly deserted by his wife, is entrusted to deliver a mysterious package but gets more than he bargained for at the receiving end; a Thai chauffeur takes his troubled charge to a seer, who penetrates her deepest sorrow; and, in the unforgettable title story, a boy acknowledges a shattering secret about his past that will change his life forever.

But the most compelling character of all is the earthquake itself—slipping into and out of view almost imperceptibly, but nonetheless reaching deep into the lives of these forlorn citizens of the apocalypse. The terrible damage visible all around is, in fact, less extreme than the inconsolable howl of a nation indelibly scarred—an experience in which Murakami discovers many truths about compassion, courage, and the nature of human suffering.
Read More
“Ushers the reader into a hallucinatory world where the real and surreal merge and overlap, where dreams and real-life nightmares are impossible to tell apart.” —Michiko Kakutani, The New York Times

“His characters are so persuasive, and the storytelling so spacious. . . . Murakami’s crisp, accomplished stories in After the Quake have great immediacy.” —The Seattle Times

“One of the great Japanese exports.” —Details

“In these stories . . . Murakami proves himself to be almost as fantastic–and as heroic–as his creations.” –Elle

“Haruki Murakami remains one of the most accessible Japanese writers for Western readers.” –LA Times

“Spare yet richly mysterious and emotionally prismatic, these unpredictable tales explore the subtle ways the earthquake affected those who live far from its epicenter yet who are nonetheless shaken to their very core. . . .Haunting.” –Booklist (starred review)

“The stories here are well-crafted and lyrical . . . They are sometimes absurd, sometimes quite funny, but they all have real epiphanies and real moments of feeling.” –Rocky Mountain News
Read More