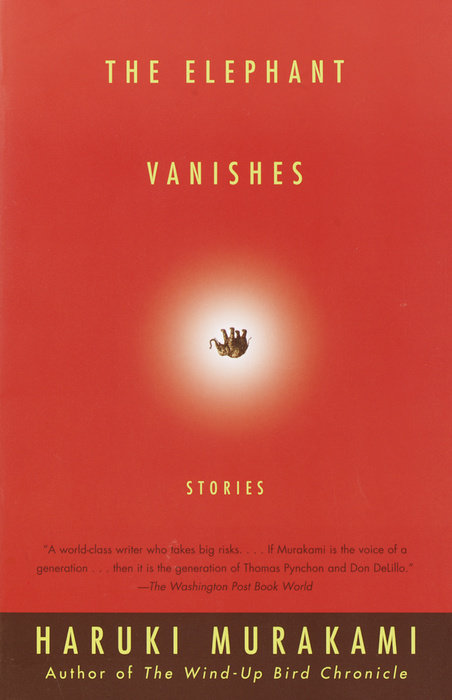 With the same deadpan mania and genius for dislocation that he brought to his internationally acclaimed novels A Wild Sheep Chase and Hard-Boiled Wonderland and the End of the World, Haruki Murakami makes this collection of stories a determined assault on the normal. A man sees his favorite elephant vanish into thin air; a newlywed couple suffers attacks of hunger that drive them to hold up a McDonald's in the middle of the night; and a young woman discovers that she has become irresistible to a little green monster who burrows up through her backyard.

By turns haunting and hilarious, The Elephant Vanishes is further proof of Murakami's ability to cross the border between separate realities -- and to come back bearing treasure.

“Eerie, unsettling. . . . [A] wonderful combination of the bizarre and the mundane.” –Village Voice Literary Supplement

“Charming, humorous and frequently puzzling . . . The Elephant Vanishes [is] fun to read.” –The New York Times

“These stories show us Japan as it’s experienced from the inside. . . . [They] take place in parallel worlds not so much remote from ordinary life as hidden within its surfaces. . . . Even in the slipperiest of Mr. Murakami’s stories, pinpoints of detail flash out . . . warm with life, hopelessly–and wonderfully–unstable.” –The New York Times Book Review

“A stunning writer at work in an era of international literature.” –Newsday

“Enchanting…intriguing…all of these tales have a wonderfully surreal quality and a hip, witty tone. Mr. Murakami has pulled off a tricky feat, writing stories about people who are bored but never boring. He left me lying awake at night, hungry for more.” –Wall Street Journal

“The Elephant Vanishes, through [its] bold originality and charming surrealism, should win the author new readers in this country.” –Detroit Free Press
Read More