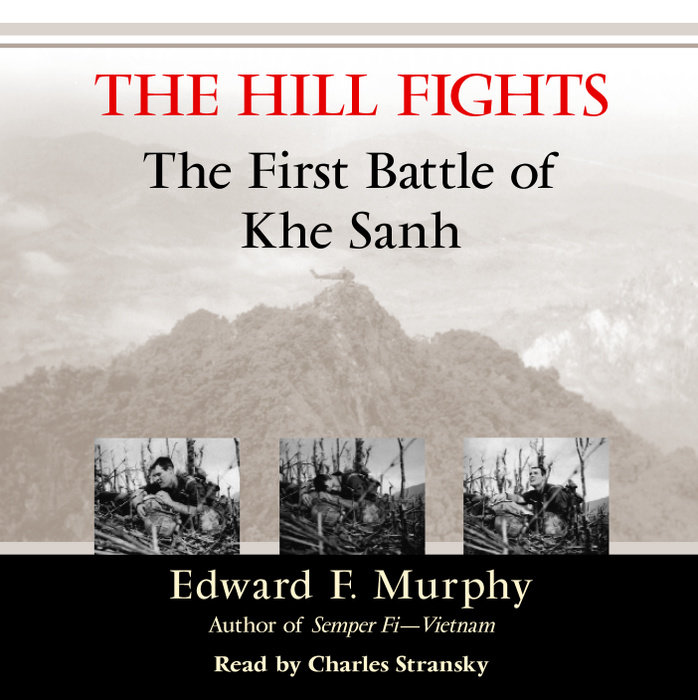 Written by: Edward F. Murphy
Read by: Charles Stransky
2 Hours and 7 Minutes Imprint: Random House Audio Genre: History - Wars & Conflicts - Vietnam War Release Date: April 29, 2003
While the seventy-seven-day siege of Khe Sanh in early 1968 remains one of the most highly publicized clashes of the Vietnam War, scant attention has been paid to the first battle of Khe Sanh, also known as “the Hill Fights.” Although this harrowing combat in the spring of 1967 provided a grisly preview of the carnage to come at Khe Sanh, few are aware of the significance of the battles, or even their existence. For more than thirty years, virtually the only people who knew about the Hill Fights were the Marines who fought them. Now, for the first time, the full story has been pieced together by acclaimed Vietnam War historian Edward F. Murphy, whose definitive analysis admirably fills this significant gap in Vietnam War literature. Based on first-hand interviews and documentary research, Murphy’s deeply informed narrative history is the only complete account of the battles, their origins, and their aftermath.

The Marines at the isolated Khe Sanh Combat Base were tasked with monitoring the strategically vital Ho Chi Minh trail as it wound through the jungles in nearby Laos. Dominated by high hills on all sides, the combat base had to be screened on foot by the Marine infantrymen while crack, battle-hardened NVA units roamed at will through the high grass and set up elaborate defenses on steep, sun-baked overlooks.

Murphy traces the bitter account of the U.S. Marines at Khe Sanh from the outset in 1966, revealing misguided decisions and strategies from above, and capturing the chain of hill battles in stark detail. But the Marines themselves supply the real grist of the story; it is their recollections that vividly re-create the atmosphere of desperation, bravery, and relentless horror that characterized their combat. Often outnumbered and outgunned by a hidden enemy—and with buddies lying dead or wounded beside them—these brave young Americans fought on.

The story of the Marines at Khe Sanh in early 1967 is a microcosm of the Corps’s entire Vietnam War and goes a long way toward explaining why their casualties in Vietnam exceeded, on a Marine-in-combat basis, even the tremendous losses the Leathernecks sustained during their ferocious Pacific island battles of World War II.

The Hill Fights is a damning indictment of those responsible for the lives of these heroic Marines. Ultimately, the high command failed them, their tactics failed them, and their rifles failed them. Only the Marines themselves did not fail. Under fire, trapped in a hell of sudden death meted out by unseen enemies, they fought impossible odds with awesome courage and uncommon valor.
Read More