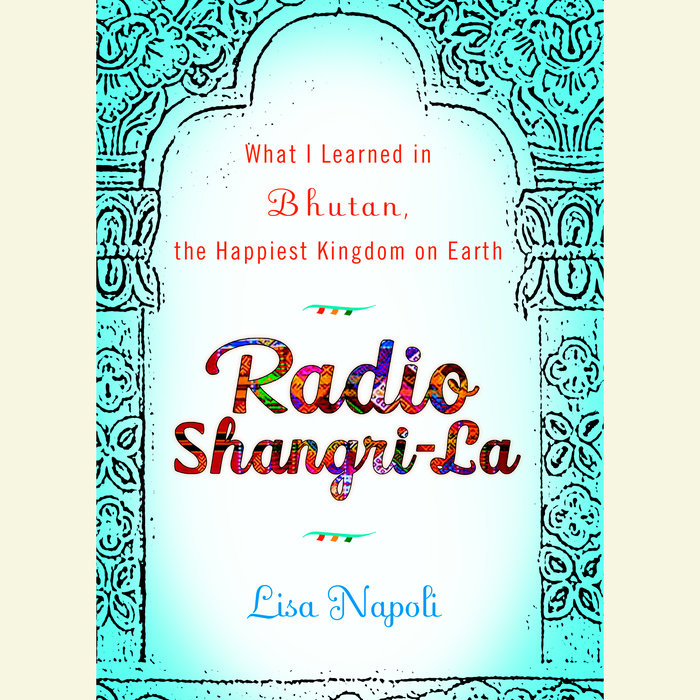 Written by: Lisa Napoli
Read by: Lisa Napoli
7 Hours and 39 Minutes Imprint: Random House Audio Genre: Travel - Asia - Southwest Release Date: February 08, 2011
Lisa Napoli was in the grip of a crisis, dissatisfied with her life and her work as a radio journalist. When a chance encounter with a handsome stranger presented her with an opportunity to move halfway around the world, Lisa left behind cosmopolitan Los Angeles for a new adventure in the ancient Himalayan kingdom of Bhutan—said to be one of the happiest places on earth.

Long isolated from industrialization and just beginning to open its doors to the modern world, Bhutan is a deeply spiritual place, devoted to environmental conservation and committed to the happiness of its people—in fact, Bhutan measures its success in Gross National Happiness rather than in GNP. In a country without a single traffic light, its citizens are believed to be among the most content in the world. To Lisa, it seemed to be a place that offered the opposite of her fast-paced life in the United States, where the noisy din of sound-bite news and cell phones dominate our days, and meaningful conversation is a rare commodity; where everyone is plugged in digitally, yet rarely connects with the people around them.

Thousands of miles away from everything and everyone she knows, Lisa creates a new community for herself. As she helps to start Bhutan’s first youth-oriented radio station, Kuzoo FM, she must come to terms with her conflicting feelings about the impact of the medium on a country that had been shielded from its effects. Immersing herself in Bhutan’s rapidly changing culture, Lisa realizes that her own perspective on life is changing as well—and that she is discovering the sense of purpose and joy that she has been yearning for.

In this smart, heartfelt, and beautifully written book, sure to please fans of transporting travel narratives and personal memoirs alike, Lisa Napoli discovers that the world is a beautiful and complicated place—and comes to appreciate her life for the adventure it is.
Read More
“ [an] affectionate portrait of life in a slower-paced, high altitude society…absorbing, often touching memoir”--The New York Times Book Review

"From the moment she walks off the plane, Ms. Napoli knows she's a universe away... [She] is infatuated with Bhutan, and...has an eye for a good story."--Wall Street Journal

“Joyful….You’ll close the book wishing you could head to Bhutan on the next plane.”--Toronto Star

"A rare gift....Radio Shangri-La is much more than just a story of a midlife crisis. It’s the chronicle of a country barreling toward change, and a woman’s search for what happiness really means at any age."--Christian Science Monitor

"Comparisons to the wildly popular Eat Pray Love,’ Elizabeth Gilbert’s international travel romp through meals, meditation, and men, are easy to see...In a refreshing twist on the female travel memoir, Napoli stands brilliantly apart from [Elizabeth] Gilbert in that, in the end, she chooses herself and not another man."--Boston.com

"Radio Shangri-La reminded me of Deborah Rodriguez’s 2007 bestselling Kabul Beauty School. Only better, if for no other reason than the writing here is just so sharp and terrific…Journalist Napoli writes stylishly about physical and spiritual renewal. Part travel memoir, part crossroads handbook, Radio Shangri-La is unforgettable.—JanuaryMagazine.com

“Radio Shangri-La  has shades of Pico Iyer and Bruce Chatwin and a similar genius for parachuting the reader into a strange land and culture.  Bhutan has long fascinated me and Radio Shangri-La is the perfect vehicle to get there."– Abraham Verghese, author of Cutting for Stone

"Radio Shangri-La is a beautiful, touching and deeply compelling memoir by a well-known public radio reporter who arrived in the tranquil kingdom of Bhutan to help establish the nation's first radio station and, as important, to further her own mid-life assessment of a life that felt full of missteps.  The book is delightful reading--honest, moving and quietly spiritual as it offers both an intimate portrait of a country only halfway to modernity and a soul in quest of meaning."--Scott Turow, author of Innocent

"Radio Shangri-La grabs you by the heart and takes you on a winding dual journey -- into the self and into a fairy tale kingdom known for measuring happiness as its gross national product. Charming, illuminating, and often ironic, this memoir is a continuous discovery of myths and realities in finding deeper personal meaning."--Amy Tan, author of The Joy Luck Club and Saving Fish from Drowning

"Bummed out in midlife, [Lisa] Napoli went to Bhutan to volunteer at the country's first youth-oriented radio station...She reveals the truths--and, yes, happiness--she found there. Perfect for everyone who loves finding-yourself-through-travel memoirs."-- Library Journal