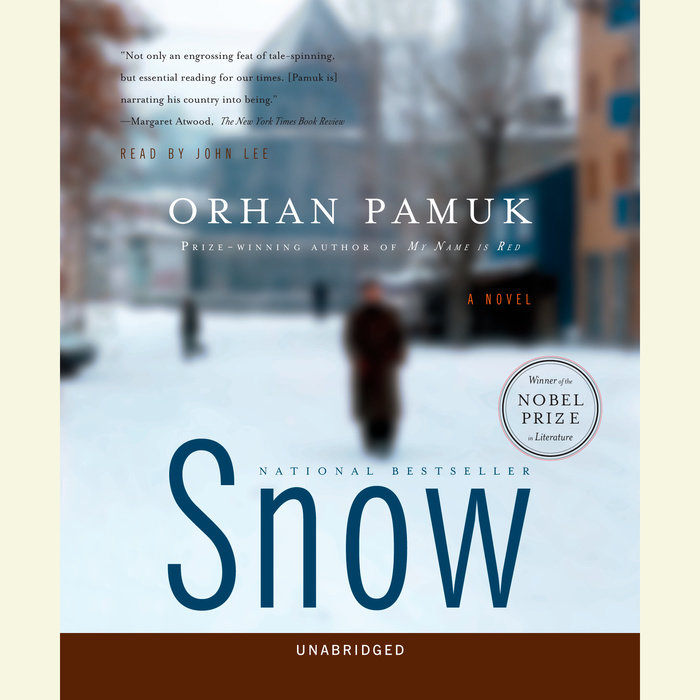 “A great and almost irresistibly beguiling . . . novelist. . . . [Snow is] enriched by . . . mesmerizing mixes: cruelty and farce, poetry and violence, and a voice whose timbres range from a storyteller’s playfulness to the dark torment of an explorer, lost.”–The New York Times

An exiled poet named Ka returns to Turkey and travels to the forlorn city of Kars. His ostensible purpose is to report on a wave of suicides among religious girls forbidden to wear their head scarves. But Ka is also drawn by his memories of the radiant Ipek, now recently divorced.
Amid blanketing snowfall and universal suspicion, Ka finds himself pursued by figures ranging from Ipek’s ex-husband to a charismatic terrorist. A lost gift returns with ecstatic suddenness. A theatrical evening climaxes in a massacre. And finding God may be the prelude to losing everything else. Touching, slyly comic, and humming with cerebral suspense, Snow is of immense relevance to our present moment.
Read More
"A major work . . . conscience-ridden and carefully wrought, tonic in its scope, candor, and humor . . . entirely contemporary . . . with suspense at every dimpled vortex . . . Pamuk is gifted with a light, absurdist touch . . . In Turkey . . . to write with honest complexity about such matters as head scarves and religious belief takes courage. Pamuk [is] that country's most likely candidate for the Nobel Prize."
–John Updike, The New Yorker

“Not only an engrossing feat of tale-spinning, but essential reading for our times . . . Snow is eerily prescient, both in its analyses of fundamentalist attitudes and in the nature of the repression and rage and conspiracies and violence it depicts . . . [Pamuk] deserves to be better known in North America, and no doubt he will be.”
–Margaret Atwood, New York Times Book Review

“From the Golden Horn, with a wicked grin, the political novel makes a triumphant return . . . As if Nabokov and Rushdie had taken their circus act on the road, or Carlos Fuentes were Anatolian instead of Aztec, or Milan Kundera remembered how to laugh.”
–John Leonard, Harper’s Magazine

“[A] great and almost irresistibly beguiling novelist . . . [Snow] is enriched by the author's mesmerizing mixes: cruelty and farce, poetry and violence, and a voice whose timbres range from a storyteller's playfulness to the dark torment of an explorer, lost.”
–Richard Eder, New York Times

“Richly detailed . . . A thrilling plot ingeniously shaped . . . Vividly embodies and painstakingly explores the collision of Western values with Islamic fundamentalism . . . An astonishingly complex, disturbing view of a world we owe it to ourselves to better understand.” —Kirkus Reviews

From the British reviews of Snow

“A novel of profound relevance to the present moment. The debate between the forces of secularism and those of religious fanaticism is conducted with subtle, painful insight into the human weakness that can underlie both impulses.” —Bel Mooney, The Times

“‘How much can we ever know about love and pain in another’s heart? How much can we hope to understand those who have suffered deeper anguish, greater deprivation, and more crushing disappointments than we ourselves have known?’ Such questions haunt the poet Ka . . . [in] this novel, as much about love as it is about politics.” —Sarah Emily Miano, The Observer

“Profound and frequently brilliant . . . Pamuk shows decisively that the European novel remains a form, and a freedom, for which we have reason to be thankful . . . Snow illuminate[s] the confrontation between secular and extremist Islamic worlds better than any work of nonfiction I can think of.” —Julian Evans, New Statesman

“Snow has already been a bestseller in Turkey - given Pamuk's stature as a novelist and the novel's content it could hardly fail to be. But what makes it a brilliant novel is its artistry. Pamuk keeps so many balls in the air that you cannot separate the inquiry into the nature of religious belief from the examination of modern Turkey, the investigation of East-West relations, and the nature of art itself ... All this rolled into a gripping political thriller.” —John de Falbe, Spectator

“What a pleasure it is when we come across some really fine fiction now and again. From its opening words, Orhan Pamuk's new novel Snow stands out from the contemporary slush ... Without ever drifting into the doldrums of meditation, Pamuk has managed to write a novel of ideas in the form of a highly dramatic story. This he achieves by a skilful, and very natural blending of the techniques of poetry and prose ... When it first came out in Turkey in 2002, Snow angered Westernised Turks and Islamists alike. This ambivalence complements the novel's construction which grows, most satisfyingly, out of one single image - an elegance which gives to the whole a profound sense of unity, and fragility. Snow is a genuine tour-de-force.”
–Ron Butlin, Sunday Herald

“A melancholy farce full of rabbit-out-of-a-hat plot twists that, despite its locale, looks uncannily like the magic lantern show of misfire, denial, and pratfall that appears daily in our newspapers . . . Pamuk gives convincing proof that the solitary artist is a better bellwether than any televised think-tanker.” —Stephen O’Shea, Independent on Sunday

“An urgent question seethes at the heart of Orhan Pamuk's latest novel: ‘Can the West endure any democracy achieved by enemies who in no way resemble them?’ Judging by the Turkish author's devastating parable of political extremism, the answer is no ... As in The White Castle and My Name is Red, Pamuk elegantly dissects the recurrent quandary in Turkish history - look westwards, or inwards and backwards. ... Never one to flinch from the weighty issues of Turkey's past and present history, Pamuk is here at his most political yet.” —Angel Gurria-Quintana, Financial Times

“Pamuk can lift the veil on a world that, to many Westerners at least, would not exist. This is a timely translation ... Its compassion for all sides and painstaking march towards tragedy is breathtaking.'
–James Hundleby, Jack

“Pamuk uses his powers to show us the critical dilemmas of modern Turkey. How European a country is it? How can it respond to fundamentalist Islam? And how can an artist deal with these issues? . . . He is the sort of writer for whom the Nobel Prize was invented.” —Tom Payne, Daily Telegraph
Read More